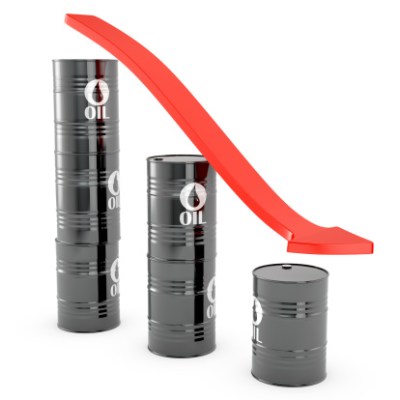 U.S. crude oil inventories rose by nearly 7 million barrels last week, and although gasoline inventories fell by nearly 2 million barrels, there is still a lot of both in storage tanks, particularly along the East Coast of the United States and at the nation’s main crude oil pricing point at Cushing, Oklahoma.

On the Nymex today, the WTI crude futures contract for June delivery is $90.54 a barrel, down nearly 3% since yesterday. The December futures contract currently sits at $89.24 a barrel and the April 2014 contract trades at $88.96 a barrel. This market position, known as backwardation, has prevailed since at least last fall, with a brief period of contango tossed in earlier this year.

Barring a significant shock to global markets, crude prices and gasoline prices are very likely to continue on this downward slope for many months to come. The bottom is anybody’s guess, but a WTI price below $80 a barrel is a better than even chance, with a good chance that prices will fall below $75 a barrel, perhaps even well below that level.

The price differential between WTI and Brent crude is also closing. Today’s spread is around $9.24 a barrel, about a third of the peak spread near $28 in September of 2011. The following chart, courtesy of YCharts, shows what’s been happening with the WTI-Brent spread over the past three years to April 22nd:

The spread has not been lower than this in more than two years. And it is narrowing toward lower-priced WTI as more of the cheaper crude from Canada and North Dakota is transported by rail to East Coast and Gulf Coast refineries.

Several factors are contributing to the decline. First, more and cheaper crude oil is getting to the eastern portion of the U.S. from North Dakota and Canada. Second, U.S. demand is falling as more fuel-efficient cars are being purchased, replacing older less fuel-efficient models. Third, it is not in the best interests of major OPEC producers such as Saudi Arabia, Kuwait and Abu Dhabi for prices to remain high. These countries can afford to have Brent prices fall by half or so from current levels because they can call on their cash reserves until prices stabilize.

In the first case, U.S. output is growing, not dropping and given the latest survey data related to an even larger potential resource in the Bakken play, U.S. output is not likely to fall for at least another two or three years at least.

In the second case, U.S. production will not be cut, so that will mean that either OPEC or Russia will have to cut production. Neither is likely. What is more likely is that major international integrated producers like Exxon Mobil Corp. (NYSE: XOM) and Chevron Corp. (NYSE: CVX) will curtail spending on costly new projects until crude prices show signs of rising again.

U.S. consumption is not rising, but falling. Demand is growing globally, but prices will not necessarily rise because supply can easily be redirected from the U.S. and Europe to fill rising demand in China and India. It is not a zero-sum game of course, but do not be surprised if the major energy agencies begin to pare their demand growth estimates even further for 2013.

Since early February, Brent crude oil prices have fallen more than 17%, and reformulated (RBOB) gasoline has come down 13% since early March. This is just the beginning of sharply lower crude and gasoline prices.