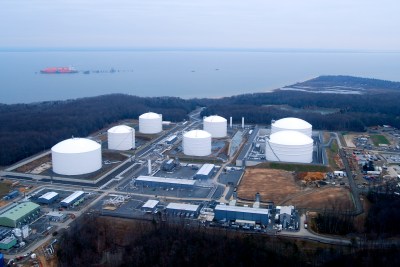 Source: Dominion Resources Inc.
Dominion Resources Inc. (NYSE: D) announced in late March that it would spin off its wholly owned midstream operating company, Dominion Midstream Partners, into a separately traded master limited partnership. The main assets of the new company are the Cove Point LNG import and regasification plant on the Maryland coast of Chesapeake Bay and the 136-mile long pipeline that connects Cove Point to interstate pipelines onshore.

The company has already proposed converting the regasification plant to a liquefaction plant, and that has heated up opposition to the both the plant and the spin-off of Dominion Midstream. The conversion project has received conditional approval from the U.S. Department of Energy.

Dominion’s plan for Cove Point was guaranteed to draw fire from environmentalists, and the latest salvo came last week when the Chesapeake Climate Action Network (CCAN) released the results of a report on Dominion Midstream that the environmental group commissioned from Netherlands-based research firm Profundo. The report states that the common units of Dominion Midstream are “exposed to serious governance and sustainability risks” primarily related to the Cove Point project for which the proceeds of the Dominion Midstream initial public offering (IPO) are intended to be used.

Among the environmental concerns is the possibility that if the Cove Point project is approved natural gas producers will expand their fracking activities into Maryland, where no drilling has yet occurred. Other environmental objections include the amount of pollution emitted by the utility-scale power plant that would be constructed at Cove Point and the increase in large ships entering the Chesapeake Bay every year. The CCAN estimates an additional 85 LNG tankers a year.

Dominion’s is one in a long line of proposed LNG liquefaction projects, including those sponsored by the likes of Exxon Mobil Corp. (NYSE: XOM) at its Gulf Coast Golden Pass facility and Kinder Morgan Energy Partners L.P.’s (NYSE: KMP) Elba Island facility off the Atlantic coast of Georgia.

Cheniere Energy Partners L.P.’s (NYSEMKT: CQP) Gulf of Mexico Sabine Pass LNG liquefaction project is the only U.S. project that has so far received approval to operate. The first two LNG trains at Sabine Pass are expected to begin operations late in 2015 and the second two trains are expected to become operational beginning late in 2016. A third pair is in the design and development stage.