Source: courtesy of Chevron Corp.
At its analysts’ day presentation Tuesday morning, Chevron Corp. (NYSE: CVX) said the company plans to grow net production by 20% by 2017. On the basis of 2.6 million barrels of oil equivalent per day, that works out to a total of 3.1 million barrels a day. Where that growth is expected to come from is interesting, as is the company’s answer to why grow at all in a time of declining demand.

The good news for Chevron in 2014 is that its tight (shale) oil production rose by 41,000 barrels a day and growth from its capital projects totaled 13,000 barrels a day. In the two-years between the first quarter of 2013 and the fourth quarter of 2014 Chevron reduced its drilling costs per foot by 20% and its completion costs by 28%, and it increased the number of wells drilled with a single rig by 21%.

In the Permian Basin, Chevron holds approximately 2 million net acres and a potentially recoverable resource base of 7 billion barrels of oil equivalent. The company’s royalty rate in the Permian is less than $5 a barrel, less than half that of its nearest rival in the top 10 net producers in the region.

Two major projects in the Gulf of Mexico began production in 2014. The Jack/St. Malo field has four wells of a projected 10 already producing, with two more due online by the end of this year. By the end of 2015, the field is expected to produce around 100,000 barrels a day. Chevron owns a majority interest in both fields and is the operator. The Tubular Bells project is expected to produce about 50,000 barrels a day. Chevron has a working interest of about 43% in Tubular Bells, which is majority owned and operated by Hess Corp. (NYSE: HES).

So why expand grow production 20% in the teeth of falling crude prices? In Chevron’s case, the argument is that by growing volume in higher margin barrels, the company can raise its cash flow and its average cash margin per barrel. The following chart, which Chevron included in its presentation, tells the company’s story. 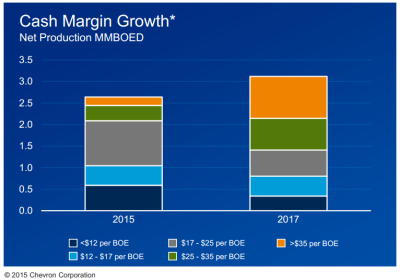 Volume growth over the three-year period was going to happen in any case, following to the plans Chevron made in 2010 to develop its Gulf of Mexico projects. The Permian Basin projects developed since then are a bonus.