UPDATE: At 1 p.m. CT, the National Hurricane Center upgraded tropical storm Harvey to Hurricane Harvey. The storm now clocks sustained winds of 85 mph and continues on its slow course toward the Gulf Coast of Texas.

The Houston Chronicle reported Shell has shut-in production on its Perdido platform and that Anadarko is removing nonessential personnel from its four Gulf fields. Valero is reported to be making preparations and watching the storm closely.

The National Hurricane Center released a new advisory on tropical storm Harvey Thursday morning at 10 a.m. CT. The storm is “quickly strengthening and forecast to be a major hurricane when it approaches the middle Texas coast … life-threatening storm surge and freshwater flooding expected.”

The storm is currently located about 365 miles southeast of Corpus Christi, with maximum sustained winds of 65 miles per hour, and is moving north-northwest at 10 mph.

Tropical storm Harvey is now expected to approach the middle Texas coast on Friday and make landfall Friday night or early Saturday before stalling near the coast through the weekend. The storm is expected to become a major hurricane before it makes landfall.

Any major storm in the Gulf of Mexico threatens U.S. offshore oil and gas production and onshore facilities such as refineries. As of May, refineries along the Texas coast had an operating capacity of 4.94 million barrels a day, nearly half the total capacity of Petroleum Administration for Defense District (PADD) 3, which comprises the states of Texas, Louisiana, Arkansas, Alabama, Mississippi and New Mexico.

High winds and possible flooding could force the suspension of operations at much of the Gulf Coast’s refining capacity, although the worst part of the storm is currently on a track to miss most of the offshore production rigs and platforms.

Citgo, which is owned by Venezuela’s PdVSA, has a 52,800 barrel per day refinery in Corpus Christi, and Flint Hills, owned by Koch Industries, operates a 296,470 barrel a day refinery there as well.

Phillips 66 (NYSE: PSX) operates a 247,000 barrel a day refinery in Sweeney, about 25 miles northeast of Matagorda.

The U.S. arm of Total S.A. (NYSE: TOT) operates a 225,500 barrel a day refinery in Port Arthur, and the massive Motiva refinery with a capacity of 625,000 barrels a day and owned by Saudi Aramco is also located in Port Arthur.

Here is the most recent storm map posted by the U.S. Energy Information Administration showing where the storm is expected to make landfall and where offshore production may be affected. 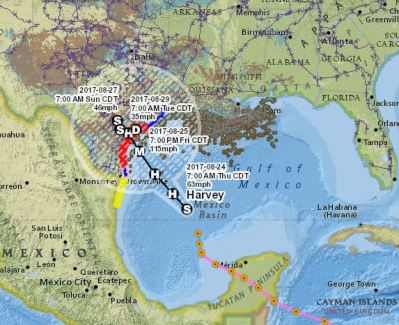 The front-month contract for West Texas Intermediate (WTI) crude oil settled at $48.41 a barrel on Wednesday, up more than 1% on the day, but it was trading down nearly 2.3% in the noon hour Thursday at $47.38 a barrel. The falling price is likely due to a reduced threat to the offshore production fields, but a hit on a refinery could boost short-term gasoline prices.