Is West African Displacing Bakken Crude at Eastern US Refineries?

Back in the old days before horizontal drilling and hydraulic fracturing created a new source of crude oil production in North Dakota and Montana, refineries on the east coast of the United States received most of their crude by ship from west and north Africa. The eventual large volumes of Bakken crude dramatically shifted the source of crude for those refineries from across the Atlantic to the northern Plains.

Crude-by-rail (CBR) deliveries boomed from about 2012 until late last year when low crude prices could no longer make up for the high costs of rail transport. Shipping a barrel of crude by rail cost between $10 and $15 a barrel in 2013 when the price differential between Bakken and Nigerian crude favored the domestic crude by nearly $20 a barrel.

That differential has shrunk to less than $2 a barrel today. A very-large crude carrier (VLCC) with a capacity for 2 million barrels of oil can transport a barrel for less than that differential at today’s day rates for that class of ship.

[T]he narrowing of the differential between WTI and Brent helped improve the import economics from a convenient source: West Africa, whose light sweet crude is priced in reference to Brent. The result was a surge in imports to the East Coast from West Africa, Nigeria in particular. Inexpensive Middle East crude had crowded out Nigerian barrels from their previously favored market in India, making more Nigerian barrels available for the cross-Atlantic trade.

Those “inexpensive” crude barrels were being loaded in Iran and Saudi Arabia.

The following chart illustrates the volume of crude oil deliveries to U.S. east coast refineries. The Bakken-to-barge portion represents the volume transported part of the way by rail and final delivery by barge. 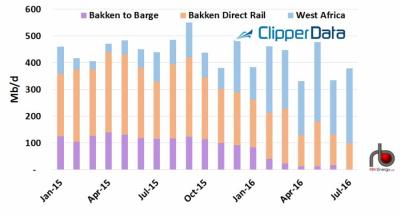 Will large volumes of Bakken production ever find their way back into the East Coast markets?  Certainly it is possible. But with more alternative markets available to Bakken producers––particularly when the delayed Dakota Access pipeline (DAPL) comes into service––and crude oil prices still below $50/bbl, it may be a long time before there is enough crude oil production to warrant significant shipments out of the Bakken by rail, particularly to the distant East Coast market.

The situation does not particularly auger well for increased production from the Bakken or for the price of U.S. crude.

Gas Prices Skyrocket on Texas Disaster, Top $3 in Some Places

Oil Price Surge Pushes Gas Above $3 in These States