US Oil Rig Count Drops by 7, Total Rigs Down by 15

In the week ended October 20, 2017, the number of rigs drilling for oil in the United States totaled 736, seven fewer compared with the prior week and up by 293 compared with a total of 443 a year ago. Including 177 other rigs drilling for natural gas, there are a total of 913 working rigs in the country, down by 15 week over week and up by 360 year over year. The data come from the latest Baker Hughes North American Rotary Rig Count released on Friday.

West Texas Intermediate (WTI) crude oil for November delivery settled at $51.29 a barrel on Thursday and traded up about 0.3% Friday afternoon at $51.43 shortly before regular trading closed.

The natural gas rig count decreased by eight to a total of 177 this week. The count for natural gas rigs is now 69 higher year over year. Natural gas for November delivery traded up about 1.2% at around $2.90 per million BTUs before the count was released and rose to $2.93 afterward.

The Federal Reserve Bank of Dallas noted this week that the futures curve from Brent crude went into backwardation (a commodity market condition where current spot prices are higher than futures prices) in late September. Backwardation is a signal that near-term demand is outpacing supply, giving market participants an incentive to sell now rather than to store and hold supplies for the future. The Dallas Fed said that strong OPEC compliance with the cartel’s production cuts, additional signals that the global market is rebalancing and higher-than-expected global demand have pushed near-term prices higher.

The following graph from the Dallas Fed’s report shows the price curves for Brent crude as of June 29, August 30, and September 25. 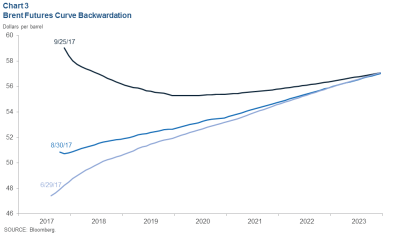 Among the states, Texas had eight fewer rigs this week, while Alaska and Wyoming lost two each and New Mexico and Utah each lost one rig. No state added a rig this week.

In the Permian Basin of west Texas and southeastern New Mexico, the rig count now stands at 378, down by six compared with the previous week’s count. The Eagle Ford Basin in south Texas has 65 rigs in operation, two more week over week, and the Williston Basin (Bakken) in North Dakota and Montana now has 51 working rigs, unchanged for the week.