US Gas Prices Bounce Back From Last Week

Over the past week, U.S. retail gasoline prices have bounced back across much of the land, with a national average of $2.55 per gallon, an increase of three cents. GasBuddy conducts this weekly survey to keep a pulse on the nation’s gas prices.

In the same time, oil prices have risen slightly to $62.13 per barrel, up 76 cents compared with prices in early trading last Monday on little change in fundamentals over the past week. Weekly data from the U.S. Energy Information Administration last Wednesday showed a large 5 million barrel increase in crude oil inventories, initially pushing oil prices down as a result, before they recovered. Large builds in oil inventories aren’t uncommon during the spring as refiners slow down processing as upgrades and maintenance take place ahead of the flurry of demand during the summer driving season.

However, gasoline inventories posted the exact opposite, falling 6.3 million barrels to a similar level from a year ago, most likely for similar reasons. All five regions of the country saw gasoline inventories declining. Total petroleum inventories remain consistently under their year-ago level with last week’s numbers lagging by 10.5% versus 2017, likely due in bulk to OPEC’s oil production cuts.

Gas prices remained mostly in check over the last week, yet the national average pushed higher as seasonal factors continue to weigh on the market, led by jumps at the pump in some Great Lakes states over the weekend. The national average now stands at its highest level in over a month and is likely to continue moving higher in the weeks ahead as demand continues to recover from the winter blues and the transition to summer gasoline kicks into high gear. Overall, gas prices this spring will come in some 10-25% higher than a year ago, removing billions of dollars from other areas of the economy that will instead be funneled to the pump. 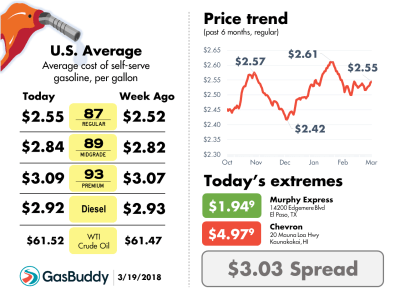