In the week ended April 13, 2018, the number of land rigs drilling for oil in the United States totaled 815, a gain of seven compared to the previous week and up by 132 compared with a total of 683 a year ago. Including 192 other land rigs drilling for natural gas and one listed as miscellaneous, there are a total of 1,008 working rigs in the country, five more than a week ago and up by 161 year over year. The data come from the latest Baker Hughes North American Rotary Rig Count released on Friday afternoon.

West Texas Intermediate (WTI) crude oil for May delivery settled at $67.07 a barrel on Thursday and traded up about 0.6% Friday afternoon at $67.44 shortly before regular trading closed.

The natural gas rig count dropped by two to 192 this week. The count for natural gas rigs is now up by 30 year over year. Natural gas for May delivery traded up about 2.1% at around $2.74 per million BTUs, up four cents since last Friday.

In its monthly report on the crude oil market released this morning, the International Energy Agency (IEA) declared that the production cuts implemented by OPEC and its partners in January 2017 will have global supply and demand back in balance by May. The following chart from Reuters tells the stockpile story month by month for OECD nations over the past four years: 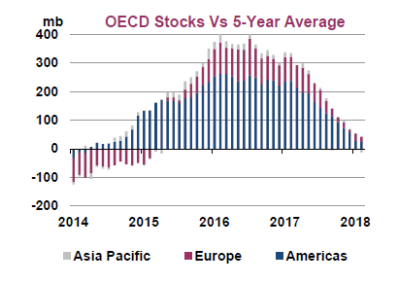 The OPEC-led consortium is producing below agreed levels because Venezuelan production is in the tank and both Libya and Angola are having issues. OPEC production in March was about 700,000 barrels a day below the 32.5 million barrel a day quota total. As a result, consumer-nations are forced to draw down stockpiles.

Reuters industry analyst John Kemp argues that now that global inventories are back in line, OPEC is urging more investment in new production. Low prices have curbed investment for more than two years, and now that prices are rising again it’s time to gin up sustainable investments in production.

Among the states, Baker Hughes reported that Texas gained three rigs this week, Oklahoma gained two and three states — Colorado, Louisiana and Ohio — each had one more rig. Kansas, New Mexico and West Virginia each lost a rig this week.

In the Permian Basin of west Texas and southeastern New Mexico, the rig count now stands at 445, one more than the previous week’s count. The Eagle Ford Basin in south Texas has 75 rigs in operation, up by two week over week, and the Williston Basin (Bakken) in North Dakota and Montana now has 55 working rigs, unchanged for the week.

Producers dropped one horizontal rig this week and the count slipped to 883, while offshore drillers reported added four new rigs to raise the offshore total to 16, down five compared to last year’s total of 21 for the same period.