Don't Have a Heart Attack During the Pandemic

A new study reported in the Journal of the American College of Cardiology sought to evaluate the potential impact of the pandemic on OHCA. Does fear of infection inhibit bystanders from offering assistance? Do new screening procedures for 911 calls affect the time it takes for EMS responders to arrive?

The researchers hypothesized that with COVID-19, “community response to OHCA and EMS processes for responding to OHCA would be altered, with negative effects on survival outcomes.”

Researchers looked at data from two U.S. counties, Oregon’s Multnomah (where Portland is located) and Ventura County, California, gathered between March 1 and May 31 for 2019 and 2020. These locations were selected because they had high COVID-19 infection rates.

The following chart graphs the difference between bystander CPR (orange line), response time for emergency medical services (blue line) and survival rate. According to the study, incidence rates did not change significantly and coronavirus infection rates were low. 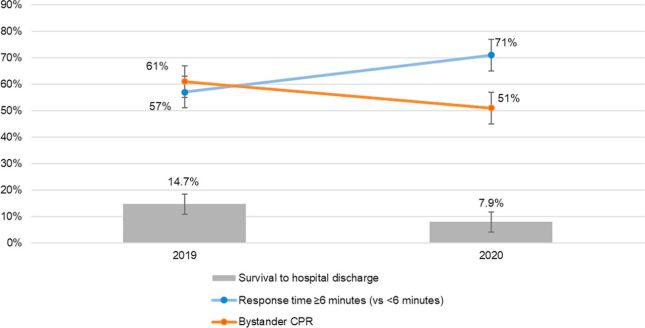 Source: Journal of the American College of Cardiology

Whether patients delayed calling 911 was not part of this study, but the researchers noted another study that reported a “steep” nationwide decline in hospital-treated acute coronary syndrome during the early pandemic period. That decline indicates that fewer people were seeking care for cardiac symptoms. Why?

According to studies cited by Consumer Reports, about half of adults who lost their jobs or income due to the pandemic avoided health care facilities, either due to cost or concern about getting infected. A Centers for Disease Control and Prevention (CDC) study found that emergency room visits were 42% lower year over year in March and April this year.

CDC data also showed that deaths related to heart disease and other non-COVID-19 causes were higher than normal. That may have been due to undiagnosed coronavirus infections or to people not getting the medical care they needed.