Big Changes to Buffett and Berkshire Hathaway Stock Holdings, A to Z 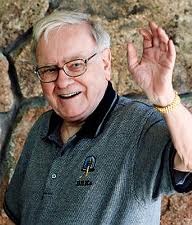 Berkshire Hathaway Inc. (NYSE: BRK-B, BRK-A) and Warren Buffett have just released their most recent U.S.-listed equity holdings for the Berkshire Hathaway empire. This cut off date is as of March 31, 2012 and Mr. Buffett has already said that he was buying some shares since the end of the quarter on weakness.

Also, keep in mind that portfolio managers Todd Combs and Ted Weschler are still new and those new positions of under $200 million $300 million are likely tied to them.

24/7 Wall St. has gone through line by line of each position to see which stocks have been bought and sold as new positions, as well as having added in whether or not the number of shares grew or shrank on each since the prior quarter. We had added some color in on some of the positions if applicable.

Be advised that the number of subsidiaries that this filing covers is 14 entities rather than 18 entities in the prior quarter. There is also a note in the 13F filing showing that the SEC has granted “Confidential Treatment” on some Berkshire stock holdings and that likely suggests that Buffett is still acquiring a position he does not want the public to know about yet. This filing does not signal the half-dozen or more European shares that Buffett said he bought so that remains an outstanding issue as well.

CVS Caremark Corporation (NYSE: CVS) is the SAME SIZE at 7.106 million shares after having been a new holding in a recent quarter and having been raised one quarter ago.

ConocoPhillips (NYSE: COP) is roughly 29.1 million shares, roughly the SAME AS BEFORE but it is still lower than previous quarters in past reports.

Costco Wholesale (NASDAQ: COST) 4,333,363 Shares, SAME AS last quarter after having lowered it before.

Da Vita Inc. (NYSE: DVA) is now 6 million shares worth $541 million and that LARGER THAN BEFORE after having been a new position of 2.684 million shares.

DirecTV (NASDAQ: DTV) is a LARGER POSITION listed at 22.999 million worth over $1.13 billion. This one had been 20.348 million shares worth $870 million one quarter earlier and it had been a new position just two quarters ago at 4.249 million shares.