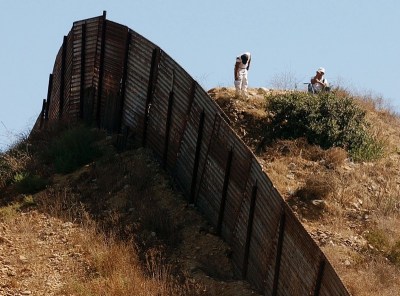 The illicit trade in humans, drugs, organs, and nine other huge international criminal activities produces $650 billion in revenue per year. 24/7 Wall St. gathered data from from a Global Financial Integrity report entitled “Transnational Crime in the Developing World.” The report provided information from the UN, the International Labor Organization,the Organization for Economic Cooperation and Development, and the Center for Defense Information, and was used to identify the twelve largest international criminal activities in the world.

There are no victimless crimes, this data shows. Extensive deforestation of the Amazon region allows sale of lumber without tax or tariffs and continues to damage the world’s ecosystem. Organs which are harvested overseas and shipped to the US are sold to people who might have to wait months or years for them. The people at the top of lists to get transplants almost never have access to these body parts. Art stolen from the excavation of ancient ruins prevents archaeologists from adding to our knowledge of distant civilizations. These artifacts are also lost to universities and museums where they could become part of valuable exhibits.

The most profound financial impact of the $650 billion each year in international crime is that it deprives nations of tax receipts. This affects small, developing countries which have mines and valuable wildlife as their primary resources. These countries, and the people who live there, receive nothing from the goods which  are illegally harvested within their borders. In many cases, the impoverished citizens of a country are paid next to nothing, while the middlemen – the international gangs and cartels – reap billions in profits.

International crime is primarily perpetrated by individuals who either live in developed nations or already have fortunes in the underdeveloped world. Humans trafficking usually begins in a country like Nigeria or Vietnam, and these “stolen” people are most often sent to wealthy countries like the US, Saudi Arabia, and Japan. Drugs which are grown in South America and Afghanistan earn little profit for the farmers in these nations. Middle men make most of the money as they package and ship drugs. Local dealers make modest amounts at best. The reward matches the risk in the drug trade.  Criminals who traffic in tons makes more than the dealers who sells ounces.

In its work to properly explain the Twelve Most Profitable International Crimes, 24/7 Wall St. analyzed source material that provided the estimated value of the market for each criminal enterprise, the directionality of the flow (the countries of origin and destination), the amount and type of illegal contraband or people sold, how profits are distributed, and the impact of the trade on developing countries. The twelve categories include drugs, humans, wildlife, counterfeit goods and currency, human organs, small arms, diamonds and colored gemstones, oil, timber, fish, art and cultural property, and gold. The list might have included credit card fraud, advance fee fraud, and intellectual property theft, but the data on these are not sufficient to be included in this analysis.

There is a human toll involved in most of these crimes and it cannot be measured. If gold or diamonds are stolen systematically from an impoverished region, there is often nothing of substance left for the local miners. Small arms sold by arms dealers to areas in constant conflict just makes the business of killing easier. The unspeakable horror of the kidnapping and sale of humans into slavery is immeasurable.

Crimes which cross borders are almost certainly more difficult to prevent than those which happen within national boundaries. This is one reason that these crimes are harder to detect and to punish. It is a great challenge to clear drug dealing from the streets of America. Imagine how difficult it is to stop the flow of drugs which comes from dozens of nations via a number of means of transportation and through a nearly limitless number of entry points. Law enforcement is only good enough to track a small portion of this flow.

The conclusion that many people will take away from this analysis is that the efforts to fight large international criminal activities is futile. This is disheartening, as the numbers in this 24/7 analysis reveals the international system for crime detection and prevention is incapable of this Sisyphean task.

According to the 2010 United Nations Office on Drugs And Crimes (UNODC) World Drug Report, Marijuana and Amphetamines are typically produced and sold without crossing international borders. This leaves cocaine and opiates to make up the $300 billion a year international drug trade. The majority of both of these drugs are produced in developing nations. Almost all cocaine is produced in Colombia, Peru, and Bolivia. The UNODC estimates the global cocaine trade is worth $88 billion per year.  Afghanistan produces roughly 75% of the world’s opiates, with Mexico and Myanmar contributing most of the balance. The UN estimates the international drug trade to be worth $65 billion per year. Of the $35 billion in profits made from selling cocaine to Americans, only $500 million were realized by coca farmers, while dealers within the U.S. made more than $29 billion. 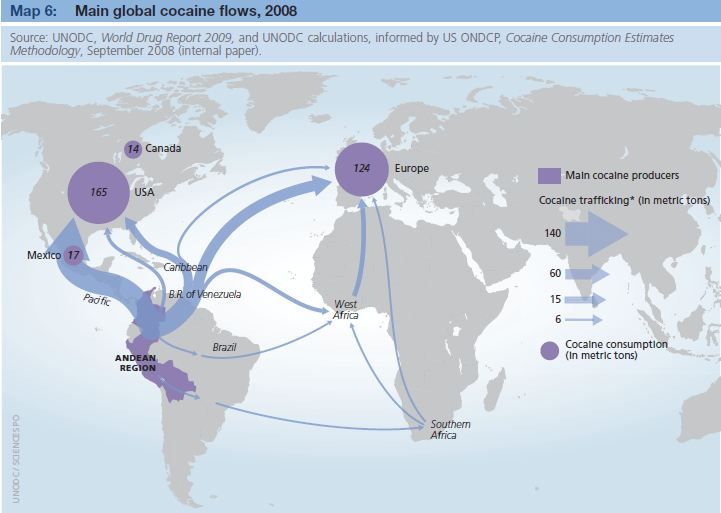