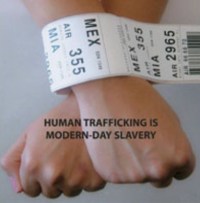 There is an important difference between migrant smuggling and human trafficking. Migrant smuggling involves the consent of the individual, and involves illegally crossing borders. Human trafficking is defined as “the act of recruiting, transporting, transferring, harboring or receiving persons for the purpose of exploitation, by using or threatening force, coercion, abduction, fraud, deception, or abuse of power against them, or by giving or receiving payment or benefit to those who control them.”  A 2005 International Labor Organization report estimates that more than 2.5 million people are exploited as victims of human trafficking, 1.4 million sexually and 1.1 million in other economic forms.  The ILO calculates human trafficking to be a $31.6 billion industry.  However, with regards to labor and production, human trafficking damages both the country of origin and the destination. The country of origin loses production capacity, thereby taking away potential GDP. In the destination country, forced labor depresses wages and, in the case of child labor, reduces potential GDP in the future by restricting access to education.

3. Illicit Wildlife Trade
> Annual Revenues From Illicit Trade: Between $7.8 and $10 Billion.
> Source Countries: Sub-Saharan Africa and Southeast Asia
> Destination Countries: China, The U.S. and The European Union
> Interesting Fact: Largely because of poaching, the tiger population in India, which used to contain the most in the world, has been halved in the past eight years.

The three main markets for Illicit wildlife trade are commercial production, exotic pets, and traditional medicine, particularly Chinese traditional medicine. Commercial products which fuels the illegal wildlife trade are made from the furs and skins of large cats and reptiles. Traditional medicine accounts for a great deal of the market as well, particularly In China, where buyers will pay as much as $2,500 for a rhinoceros horn because they are believed to have healing powers. A small portion of the market also consists of the trade of rare birds and mammals to be used as pets. TRAFFIC Europe estimates that the total legal trade in wildlife was worth $22.8 billion. Other estimates list the value at $25 billion. The Global Financial Initiative estimates the value to be between $7.8 and $10 billion.

Interpol estimates counterfeiting, primarily of knock off goods, causes a global commercial loss of $500 billion annually.  However, as counterfeit goods cost less than the real thing, the amount made by counterfeit goods is much less than the loss they cause.  Although that number is harder to calculate, a 2009 report by the Organization for Economic Cooperation and Development estimates the amount generated by counterfeit goods to be $250 billion.  China is the number one producer of counterfeit goods, but there is also known substantial production in Taiwan, Vietnam, the Philippines, Malaysia, India, Russia and other former Soviet Republics, as well as countries in Latin America and Africa.  Most of the merchandise is produced in sweatshops, so the majority of profits, according to the OECD, go to “mafias, triads and other criminal groups,” which are, “spread around the world, and commonly also deal in drugs, prostitution, human trafficking, money laundering, arms dealing and corruption.”

Experts on the illicit trade of human organs call the practice “neo-cannibalism.” Despite the name’s implications, these organs are not removed against the donor’s wishes, but are harvested willingly and sold on the black market. These hearts, lungs, livers and kidneys are then sold to the highest bidder, rather than the next person on the waiting list. The demand for transplantable organs in nations like the U.S. dramatically exceeds the available supply, and the gap continues to widen. A 2009 Reuters report states that 10% of all transplants are performed with illegally obtained organs. Profit distribution vastly favors the middleman – the person transporting the organ to the wealthy buyer in “transplant tourism” countries like China, India and Pakistan. In one reported case in China, a donor was paid $3,600 for a piece of kidney that likely fetched $150,000 on the black market. 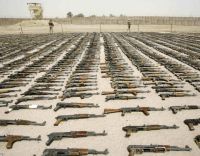 According to the Center for Defense Information, small arms and light weapons (SALW) are classified as “any weapons that can be carried by one or two people, mounted on a vehicle, or transported by a pack animal.”  This includes machine guns and rocket-propelled grenades.  Approximately 8 million arms are produced each year, and once produced, these weapons can last indefinitely.  According to an estimate by the Small Arms Survey, there are about 900 million SALW in circulation globally.  The illicit SALW market is worth around $300 to $600 million, according to the UNODC, however a 2002 Small Arms Survey estimates that number to be closer to $1 billion.  Newly manufactured SALW only account for one percent of total SALW in circulation, meaning that the majority of weapons have been in circulation for years, many produced during the Cold War.  Demand for these weapons exists almost exclusively in developing nations.