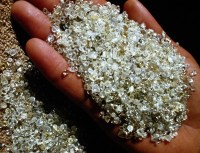 The illegal trade of precious stones has become increasingly well-known among westerners. Particularly in the public eye is the trade of so-called “blood diamonds” – stones used by genocidal militias and factions to fuel armed conflicts. A 2000 U.N. report estimated that a fifth of untreated diamonds traded internationally have illicit origins. In order to combat the sale of conflict stones, a new certification process, known as the Kimberly Process Certification Scheme (KPCS) has become common practice. This has likely reduced the sale of blood diamonds, but by no means has it come close to stopping illegal gemstones from countries like Ivory Coast, Sierra Leone, and Angola. While the exact profits in the market are difficult to pinpoint, it is apparent that the actual harvesters of the stones are exploited for their labor, and realize a tiny fraction of the profits, while middlemen who traffic the stones to dealers in the west make the vast majority of the revenue.

Unrecorded oil sales coming out of Saudi Arabia, Russia, Nigeria, Angola, and Iraq are estimated to be about 500,000 barrels a day, or 183 million barrels a year.  By using oil prices from the U.S. Energy Information Administration, Global Financial Integrity estimates that the average yearly value of illicit oil from 2003 to 2010 was $10.8 billion.  There are two types of criminal groups which profit off of the sale of illicit oil.  One is groups which are merely driven by the desire for profit.  The other, more common type of group is driven, or at least it claims to be, by politics.  They deal in illicit oil to finance armed rebellion and overcome what they consider to be economic marginalization.

While the illegal trade of wildlife may be a significant burden on local ecosystems, that impact is nothing when compared to the unchecked destruction of forests wrought by the illicit timber trade. The industry, which focuses on the sale of lumber that was harvested in violation of local laws intended to keep forests intact. The Seneca Creek and Wood Resources International report calculates that between 5% and 10%  of all timber-based global production comes from illegally harvested trees. The GFI report explains that most of the illegally harvested and sold timber in the world comes from Southeast Asia, the Congo basin in central Africa, and the rainforests of the Amazon. One report suggests that a good portion of products made with illicit timber end up in the United States and Europe, the result of the lumber originally being sourced through China, which exports large quantities of wood-based products to the west. 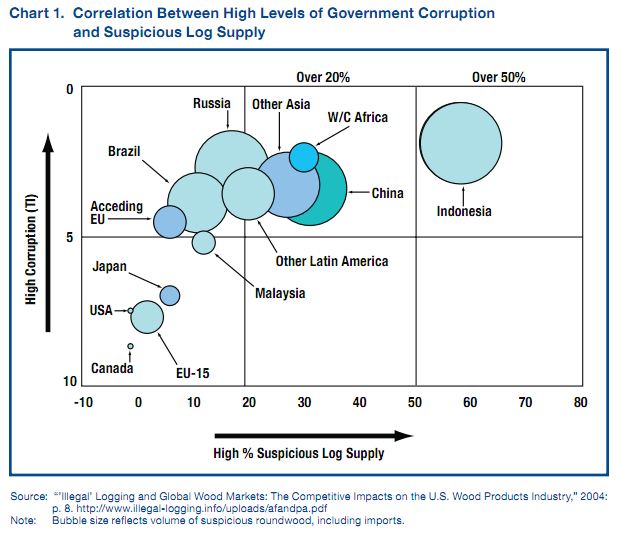 The illicit fish trade refers to any Illegal, unreported, or unregulated (IUU) fish stock that is sold in the international market.  One of the primary enablers of illicit fishing is the existence of states  which allow vessels on their national registers without requiring these vessels to fully meet normally mandatory legal requirements, thereby allowing them to avoid licensing fees, taxes, and safety requirements.  Most illegal fish caught off the coasts of developing nations are then transported to developed countries for sale.  The two areas which are most greatly affected by illicit fishing are sub-Saharan Africa and Southeast Asia.  As a result these areas lose $1 billion and $3 billion a year, respectively.  Most profits made from IUU fish is thought to go to organized crime groups.  Most of the involved laborers from developing countries are exploited and very little of the money made by the trade makes it back to the developing countries’ economies.

> Annual Revenue From Illicit Trade: between $3.4 and $6.3 Billion
> Source Countries: Iraq, Afghanistan, Thailand, China, India, Cambodia, Turkey, Mali
> Destination Countries: The United States, Western Europe
> Interesting Fact: Drug cartels are frequently involved in the illicit trade of art. In one case, a plane from Mexico was discovered with tens of thousands in ancient Colombian artifacts and 350 pound of marijuana.

The illegal art and cultural property trade is funded by extremely wealthy collectors who are willing to pay millions for stolen art and relics from museum looting and archaeological digs. The trade, which Global Financial Initiative estimates is worth between $3.4 and $6.3 billion annually, comes from nations like Thailand, China and India, and much of southeast Asia as well as war-ravaged regions where looting has occurred, notably Iraq and Afghanistan. As is the case with most illicit international trade, the middlemen, rather than the looters and scavengers, take most of the proceeds from illegally acquired goods, more than 98% of the total revenue, by some estimates.

The illicit gold trade is driven by market restrictions, such as the requirement of gold import licenses in India, and the ease of diverting illicit gold into the legitimate market.  The profits from the trade, as within most illegal markets, are distributed extremely unevenly.  Gold miners make a small amount in wages, usually ranging from $5 to $30 a day.  The majority of money goes to rebel groups and crime syndicates, however.  These groups most often own the gold mines, charge miners to work in them, and then extract a portion of the gold that is mined.  The criminal groups then also handle transportation of the gold, reaping further benefits.

-Michael B. Sauter, Charles B. Stockdale, and Douglas A. McIntyre