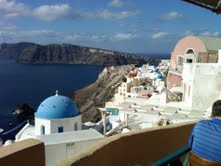 The debate over the fate of Europe’s poorer nations continues to return to Greece. It has become the canary in the coal mine as capital markets investors and other EU nations contemplate the region’s sovereign debt problems.

A team of IMF analysts recently visited Greece and they temporarily approved the continuation of financial support to Athens. They also attacked the pace at which the Greek government is restructuring its economy. Greek officials said the IMF was premature in seeking faster reform. But, the IMF analysis is likely to be right. The same advice would probably extend to Ireland and even Portugal.   For now, Greece has additional time to straighten out its fiscal affairs even though its recovery can easily be pushed off course.

“Approval of the conclusion of the third review will allow the disbursement of €15 billion (€10.9 billion by the euro area Member States, and €4.1 billion by the IMF),” the report said. “The government must ensure that reforms are sufficiently ambitious and comprehensive to tackle the deep seated structural challenges facing Greece.”

The subtle message is that the Greek government has begun to relapse into habits which caused its original problems. Greece has not cut its spending enough and is not aggressive enough about collecting taxes.

The most damaging criticism of Greece, and the one to which its government most strongly objected, is that it has not begun to reorder its assets quickly enough to offset slow growth  “It is equally important that the government notably scales up its privatization program, and more generally realizes better returns from its extensive portfolio of assets. Work is proceeding to establish a comprehensive inventory of the government’s real estate assets, and to define a phased action plan.”

Many Greek politicians and citizens do not take kindly to the joke that the Parthenon will have to be sold to partially cover the country’s debt load. It appears that the IMF wants areas along the Greek coast sold more rapidly.  Greek government industries and service businesses should be auctioned to the private sector, too.

Geeks resent the austerity and tax measures that have been imposed on them by lenders. That is easy to understand. Whether there will be a political rebellion to throw out the ruling political party and reverse some of their decisions will become clear soon. A repudiation of austerity would bring Greece closer to default, an event that a number of investors believe is inevitable. But austerity may not be the thing that pressures the government out. Greece’s citizens may object much more to what they see as a dismantling of part of their country and more worthy to fight against.