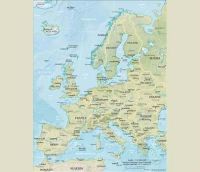 Many economists are more worried about the contagion that a Greek default would bring than about the default itself. The eurozone may increase the size of its 440 billion euro European Financial Stability Facility. That alone may keep the sovereign debt crisis from spreading to Portugal, and perhaps Spain and Italy, if only because of the psychological effect that the size of the fund would have on world markets. The barriers to an increase in the fund are not only financial. They are political, and they ultimately rest with voters.

The biggest issue that faces the nations in Europe and the banks within those nations is the fear that the European Financial Stability Facility has only enough capital to bailout a relatively small economy like Portugal. Its GDP is $229 billion, against Greece’s $305 billion. Greece’s debt is 143% of GDP. Portugal’s is 102%. Either or both are modest enough for the European Financial Stability Facility to handle a rescue.

Global capital markets investors will need to be convinced that the debts of Spain and Italy can be covered in a sovereign catastrophe. Otherwise financiers will not be convinced to buy bonds from the two nations except at usurious rates.

The European Financial Stability Facility will have to be recapitalized at a level well above where it is now, if capital markets are to believe that contagion can in effect be contained. Based on rough figures of the indebtedness of some of the troubled EU economies, the fund may have to triple in size. The region’s two largest nations by GDP — France and Germany — may not be willing to make the necessary contributions to increase the fund so much. That puts them and their banks, which hold a great deal of sovereign debt in the region, at extreme risk.

Voters in France and Germany may elect to bear that risk, rather than face what would likely to be higher taxes and a possible downgrade in their standards of living.