The explosion of the deficit in 2009 is a direct result of the financial meltdown of 2008, and the subsequent deep recession it caused [1].  Even though the dramatic effect of the Troubled Asset Relief Program (TARP) on the 2009 deficit has been erased (it was a one-off), the deficit remains stubbornly high mainly due to entitlement spending growth that is far outpacing tax revenue.  To be sure, a meaningful portion of that entitlement growth relates to high unemployment, and still-depressed tax revenue also plays a material role.  Both are artifacts of the 2008 meltdown.  Absent a strong recovery, these pressures will remain.

Thus, we may be stuck with a very large budget deficit for a long time unless Washington can convince voters to accept changes in these programs, or how they’re financed, or both.  Total entitlement spending relative to mandatory requirements under Obama has matched or actually been under Bush levels, but it’s those mandatory requirements that need to be addressed.   As a near-term tonic, we come back to the same conclusion of our last two pieces on tax policy: tax rates should be further reduced at this critical time of demand vacuum.  In my recent piece published on 247wallst.com, “Retain All Tax Cuts and Add Another”, I argue for the retention of all the Bush tax cuts and the addition of a broad middle-class tax cut.  More on the macroeconomics of a tax cut below, and why this makes sense.

The housing recovery now underway could also be a major help to government finances if it kick starts the economy.  Rising home prices, falling inventories and interest rates, lower household debt obligations, skyrocketing affordability, and continued rising homebuilder confidence together form a rock-solid foundation for a surprisingly strong housing comeback.  The latest straw in the wind: existing home sales rose 8% in August from the prior month, and 11% from a year ago.  Home Depot reported strong earnings August 14th (as of this writing, the stock is up 7% since then).  That’s exactly how a housing recovery begins to stimulate the overall economy.

But as I explain below, the grim arithmetic of government spending and taxation means that it will take a herculean effort from Washington to move the federal debt problem in the right direction.

A Dissection of the Federal Budget Deficit…The Big Bang, Followed By Infinite Expansion?

There’s a lot of talk about the budget deficit in the political realm, but not much in the way of facts.  A perusal of the federal government’s budget books indicates that most of the huge $954 billion jump in the federal deficit in 2009 came from three factors:

The deficit stayed stubbornly high in 2010 and 2011, despite a $378b reduction in Commerce and Housing Credit (reflecting the absence of TARP).  Why?  Because of growth in mandatory spending on the large entitlement programs – Social Security, Medicare, Medicaid and Income Security.  Washington has managed to reduce growth in these programs compared with 2000-2008 (Chart 2; Chart 3 shows each as a percent of the total federal budget).  Total federal spending compounded 5% in the ’09-’11 time frame (excluding the one-time drop in TARP), vs. 7% from 2000-2009.   In addition, the amount of discretionary spending relative to mandatory has not expanded of late (Chart 4).  Of course, the problem is that the entitlement programs have become so large that even slower growth in these programs can’t stop significant growth in spending relative to GDP. 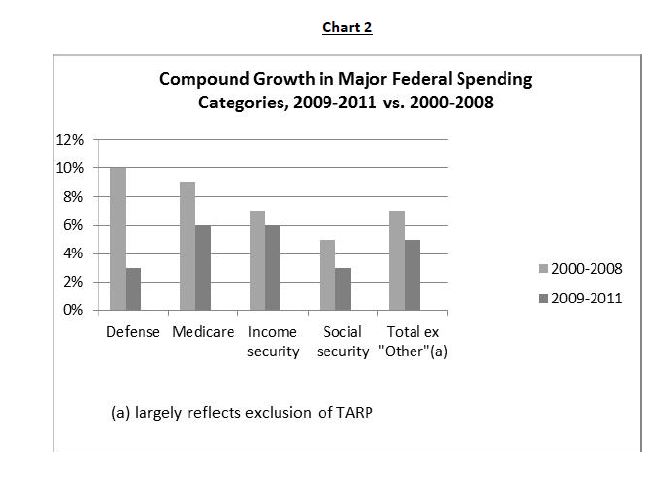 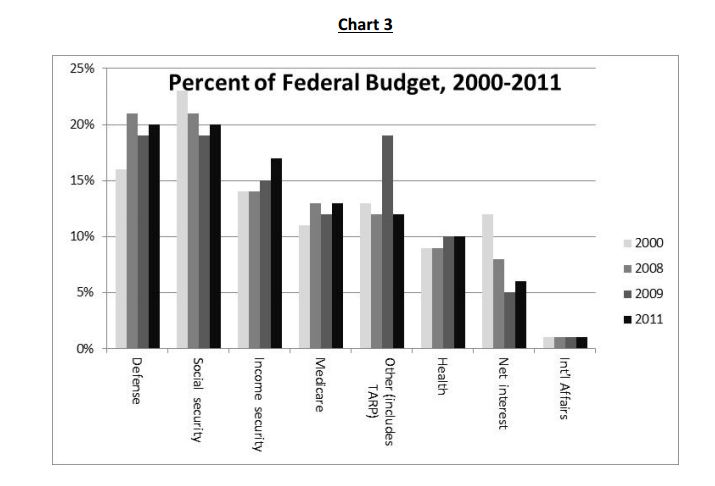 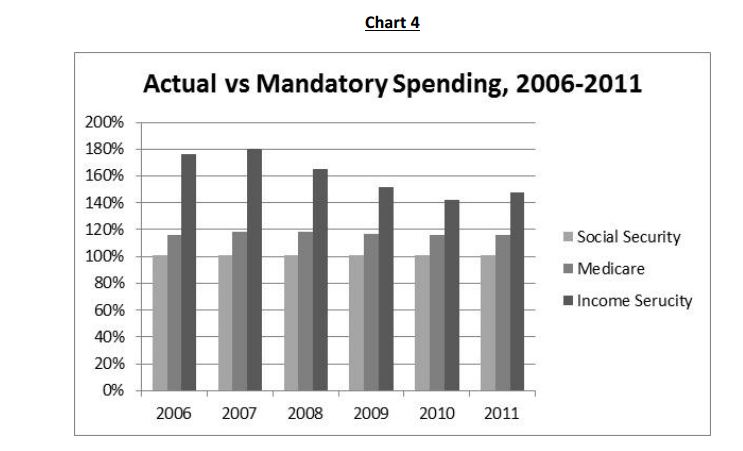 Obviously, the difficulty in curtailing spending in these programs is that constituents don’t like it, and there are a lot of folks receiving government checks, as has been noted in the media lately.  There are 62 million people on Social Security and Supplemental Security Income alone http://www.ssa.gov/policy/docs/quickfacts/stat_snapshot/).  There are 5.4 million people receiving unemployment insurance (http://www.dol.gov/opa/media/press/eta/ui/current.htm).  It is beyond the scope of this article to assess the nature of the growth of these outlays, but a good starting place would be to analyze the growth in these figures over time in the context of demographic and macroeconomic changes.

The Unavoidable Math Of Higher Debt

The upcoming presidential election will in part be a referendum on entitlement spending and taxes.  If spending is not restrained, then tax revenues need to go up, lest government debt/GDP continue past its current 75%-ish level (Chart 5).  The math is simple.  If total federal spending rises 5%, taxes must rise 7.6% just to keep the deficit steady.  That’s because government spending is a little over 50% higher than tax revenue (5% x 1.52 = 7.6%).  And yet, the near-term tonic is not raising taxes, in my view, but cutting them to spur growth.   Raising taxes will retard growth and defeat the purpose.  Real GDP growth of 3%+ would produce revenue (tax) receipt growth quite a bit in excess of that.  In 2005, real GDP rose 3.1%, and federal tax revenue, nearly 15%. And the converse is true: the 3.1% contraction in the economy in 2009 produced a 16.6% drop in federal revenue; see Chart 6 in the context of Table 1. 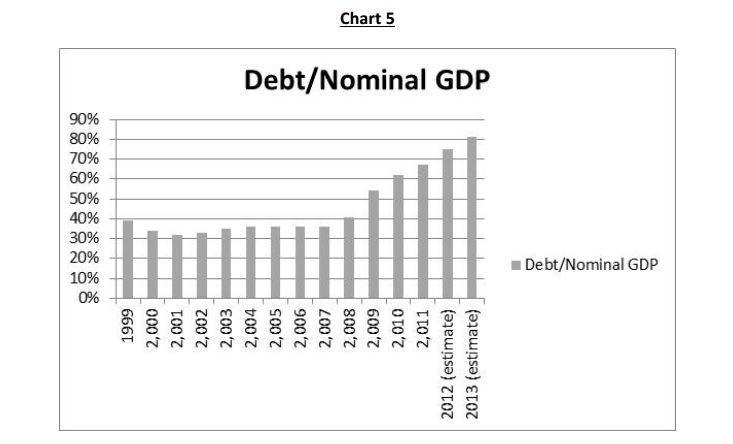 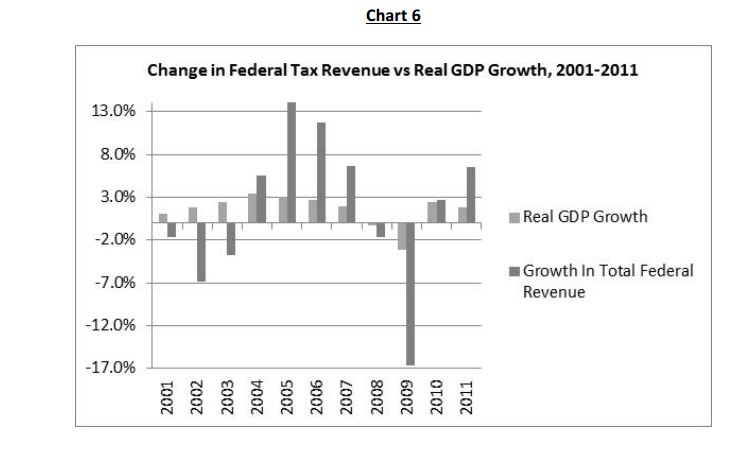 I built this case in “Retain All Tax Cuts and Add Another” (https://247wallst.com/2012/08/23/retain-all-tax-cuts-and-add-another/).  I surveyed a number of academic studies and there is ample support for the notion that the multiplier on tax cuts could be 2x – and perhaps higher.  That is, for every dollar of tax reduction, $2 of revenue is created a year or two out as that money is spent[3].  I believe the data reflected in Chart 6 is a direct reflection of that assertion.  As stated just above, in 2005, real GDP growth was around 3%; and tax revenue rose nearly 15%.  Under the Bush tax cuts, marginal income rates were reduced about 3 percentage points (and the top marginal rate went down by 5 points), and capital gains and especially dividend tax rates fell substantially.

Housing to the Rescue?

One last item: the housing sector, the most powerful and necessary leading indicator needed to start the ball rolling, continues to recover.  We went into considerable detail in our June report, “The Right Time to Revive the Homebuyer Tax Credit?” (https://247wallst.com/2012/06/06/the-right-time-to-revive-the-homebuyer-tax-credit/) to support the thesis that a powerful housing recovery could be in the offing.  We also now have the Fed targeting lower mortgage rates via QE III.  Such a recovery would help matters enormously, and provide impetus from the real economy, not the unpredictable and mostly inept policies emanating from Washington.

[3] The marginal propensity to consume should be significant in light of the material reduction in household debt obligations I reviewed in the housing piece referred to earlier.