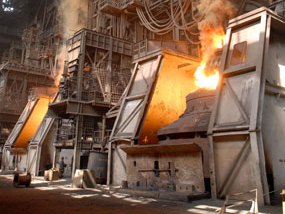 Source: courtesy of ArcelorMittal
Sterne Agee has released a consolidated report showing the firm’s top analyst stock picks in energy and industrials now that we are out of the first quarter earnings season. This will highlight value stocks and growth stocks, and we have added color on each as far as dividends and forward stock price targets. Investors should consider these to be some of the top stock picks and the best stocks to buy in each of these sectors according to the Stern Agee research team.

The Boeing Company (NYSE: BA) was the top pick for Aerospace & Defense “given our updated commercial aircraft forecast coupled with our view that Boeing’s gross order book will be >1.0x in 2013/2014. Longer-term, given the cash flow dynamics with ramping production and improving 787 cost curve, a 50% move in Boeing shares is achievable before the peak of the cycle in 2015.” Boeing’s $120 price target at Stern Agee compares to a current price of $98.92 and compares to a consensus price target of $103.90. BE Aerospace (NASDAQ: BEAV) was also shown as a top pick after Boeing with big upside. BE Aero trades at $62.95 and Stern Agee’s $72 target compares to $69.17 from Wall Street.

Ford Motor Co. (NYSE: F), General Motors Company (NYSE: GM) and TRW Automotive Holdings Corp. (NYSE: TRW) led in the Auto, Auto Parts and Auto Retailers. The firm said, “We believe all three companies are well positioned to benefit from the global demand trends, as well as the likelihood of company specific actions to enhance shareholder value.” Ford is the only one of these three with a dividend.

Consol Energy Inc. (NYSE: CNX) was Stern Agee’s Coal & Precious Metals top pick as the low-cost provider with a solid balance sheet. The firm said, “We note the solid potential of upside to Northern Appalachian thermal margins as scrubbed utilities and international power companies seek out high heat coals, with enhanced met coal margins once pricing recovers and added shale exploitation success. We believe the market will accelerate its appreciation of the asset value compiled at Consol, especially with an overcapitalized balance sheet.” Shares closed at $33.97 recently, way under the $60 target price from Stern Agee. That implies almost a double your money call, but we would caution that Wall Street’s consensus price target was $42.22 per share on last look.

Fluor Corp. (NYSE: FLR) was the top pick in Engineering & Construction and Stern Agee said, “We expect continued strong cash generation, balance sheet strength and margin expansion as the current cycle evolves. With the approval of the second U.S. LNG export facility last week, we believe these opportunities continue to become more tangible providing further catalysts for Fluor.” Stern Agee see Fluor going to $80 and Wall Street has a consensus of $75 on the stock versus $64.57 recently.

Martin Marietta Materials Inc. (NYSE: MLM) is the top pick for Construction Materials & Diversified Industrials as the number-two producer of construction aggregates with a strong balance sheet and significant operating leverage of over 60% to a volume recovery. The firm said, “For investors in housing-related stocks looking for what’s next, we think MLM is it.” At $110.91 now, the consensus target is actually under the current price at $110.67. Stern Agee has the street-high target of $128 for this stock.

Whiting Petroleum Corp. (NYSE: WLL) was the top exploration and production pick in Oil & Gas. Stern Agee said, “Given increasing activity in the Permian Basin and Niobrara this year, we see upside to 2013E production of 94.8 mboe/d. With a possible monetization of the mature Postle field and/or a joint venture in an emerging basin as 2013 catalysts, we believe shares remain attractively valued relative to our $62 price target.” Whiting’s current price is $46.54 against a consensus price target of $60.50 on the stock.

Superior Energy Services, Inc. (NYSE: SPN) was said to remain as a top pick in the Services sector which should post strong earnings and cash flow growth in 2014-15. Stern Agee likes its improving U.S. land market and rising Gulf of Mexico activity coming with strong international growth initiatives. The price of $28.44 compares to a Stern Agee target of $34.00 and a consensus target price of $32.93.

The Greenbrier Companies, Inc. (NYSE: GBX) is Stern Agee’s top pick in Shipping & Transportation Equipment. The firm said. “We believe GBX is poised to benefit from continued strong order flow for tank cars, a re-acceleration in non-tank car backlog growth, and robust margin expansion over the next two years as more higher margin tank and automotive cars are delivered out of the backlog.” Shares trade at $24.45 and hit a new 52-week high of $24.45 today, and Stern Agee sees the stock going up to $28 versus a $26 consensus price target.

Eagle Materials Inc. (NYSE: EXP) was also given a positive reiterated Buy rating. Stern Agee said that the construction recovery remains on track, as does the company’s frac sand business. Both are expected to be strong drivers over the next few years. At about $77 now, Stern Agee has a target price of $85.00 and the consensus price target is $83.50.

As you can see, some of these picks are very aggressive while others are very much in-line with Wall Street consensus target price expectations.