That didn’t take long. After a one-week absence as the Dow Jones Industrial Average (DJIA) index’s best performing stock, Boeing Co. (NYSE: BA) has reclaimed its top ranking last week with a gain of nearly 9%. For the first two weeks of 2018, Boeing shares have added 14%.

The second-best performer among the Dow 30 so far this year is Caterpillar Inc. (NYSE: CAT), up just over 8%, and it was the Dow’s second-best performer for all of 2017. General Electric Co. (NYSE: GE) held the top spot in the first week of the year but slid to third-best last week with two-week total share price jump of 7.5%. United Technologies Corp. (NYSE: UTX) has posted a gain of just over 7% to settle into the fourth spot.

Last Monday, Boeing announced full-year orders and deliveries of both commercial and defense aircraft. On the commercial side, the company delivered 763 jets, a new record total surpassing by one 2015’s total. Total net new orders for the year came to 912 and pushed the company’s total backlog to 5,864 commercial jets. The ratio of new orders to delivered planes (the book-to-bill ratio) was about 1.2 for the year.

Later in the week, the company unveiled a new unmanned, electric vertical-takeoff-and-landing (eVTOL) cargo plane that the company plans to use to test and develop Boeing’s autonomous aircraft technology for future vehicles. The cargo air vehicle (CAV) is designed to transport up to 500 pounds of “future cargo and logistics applications.” Here’s the artist’s rendering that Boeing provided: 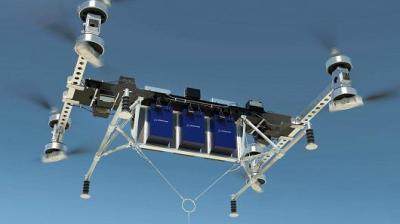