IPO News This Week: What Is Spotify Worth?

The short trading week that ended Thursday was a busy one in the initial public offering (IPO) market. A total of eight public offerings went out last week with capital raises ranging from $6 million to $2.25 billion.

The week ahead has just one IPO on the calendar, but it is a biggie: Luxembourg-based Spotify Technology SA plans to sell up to 55.7 million registered shares in an unusual direct (i.e., not underwritten) offering. More about that after a quick review of last week’s action.

Greentree Hospitality Group Ltd. (NYSE: GHG) raised $143 million selling 10.2 million shares at $14, well below the expected range. Shares dropped 7% on the first day of trading and closed the week down 9%.

Bilibili Inc. (NYSE: BILI) raised $483 million selling 42 million shares at $11.50, the midpoint of the expected range. Shares dipped 2% on the first day of trading and closed the week down 4%.

OneSmart International Education Group Ltd. (NYSE: ONE) raised $179 million selling 16.3 million shares at $11, the low-end of the expected range. Shares closed down 2% on the Thursday IPO.

OP Bancorp (NASDAQ: OPBK) raised $22 million selling 2 million shares at $11, near the high-end of the expected range. Shares added 11% on the first day of trading and closed the week up 13%.

Homology Medicines Inc. (NASDAQ: FIXX) raised $144 million in an upsized offering of 9 million shares priced at $16, the high-end of the expected range. Shares added 17% on the Thursday IPO.

Through the week ending March 29, IPO ETF manager Renaissance Capital reported that 44 IPOs have priced in the U.S. so far this year, up about 76% year over year. Total proceeds raised through last week equaled $15.5 billion, up 57% year over year.

The long-expected and long-awaited Spotify IPO is set to go off on Tuesday when shares begin trading on the New York Stock Exchange under the ticker symbol SPOT. The share price will be determined by buy and sell orders from brokers and investors should expect some serious volatility. Of the 55.7 million shares the company registered to sell, all are held by shareholders that may chose to sell all, some, or none of their equity in the company. There is no underwriter for the direct offering and Spotify will receive no proceeds from the IPO.

Renaissance Capital has posted this nifty graphic showing Spotify’s valuation since its founding in 2006. The range for the month of March, based on private sales, was $9 billion to $23 billion and RenCap has estimated an opening price of $120.50 per share. 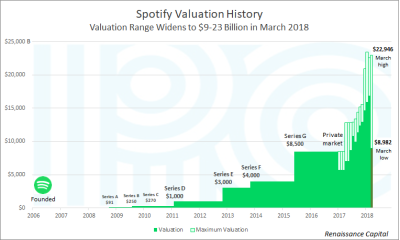