Online brokerages have seen a surge in new accounts and trading activity over the past year. Younger and novice investors are taking their first plunges into investing, during a period of wild swings in the stock market partly due to the pandemic. TD Ameritrade, E-Trade, and Charles Schwab all reported record new brokerage accounts in the first quarter of 2020.

Because the COVID-19 pandemic shut down large swaths of the economy and forced many people to shelter in place, new investors had the time at home to research equities, bonds, and other investment instruments.

24/7 Wall St. compiled a list of 12 online brokerages that serve a variety of investor needs — from novices to sophisticated investors making more complex options transactions. We compiled our list after reviewing information from financial content sources such as Investopedia, Kiplinger, Bankrate, and brokerage websites.

Even before the pandemic struck, the online brokerage industry was undergoing significant changes. Fidelity Investments, one of the nation’s largest brokerages by assets managed, announced last October that it would end commissions on U.S. stocks, exchange traded funds, and options trades online. The rest of the industry followed suit. That was great news for investors, and not so great news for online brokerages, which lost a revenue stream.

The action taken by Fidelity and other established firms was in response to the no-commission fee structures of younger firms such as Robinhood.

Industry consolidation was in the wind. A month after Fidelity announced it was discontinuing commission fees, Charles Schwab announced it was buying rival TD Ameritrade for $26 billion in an all-stock deal that would result in a combined firm with $5 trillion in assets. And in February, Morgan Stanley announced it will acquire E-Trade for $13 billion.

Despite the many changes and consolidations in the brokerage industry, investors still have plenty of options to choose from. For the novice investor, Ally Invest gets the nod from financial news media such as Kiplinger and Investorplace. Fidelity is rated strongly by Kiplinger for investment advice, while Charles Schwab, one of the discount brokerage pioneers, is acknowledged by Kiplinger for its research.

Robinhood touts its business model as a way of making investing available to greater numbers of people. For the active trader making complex options transactions, TradeStation might be the choice, according to Kiplinger and Motley Fool. Bank of America and Wells Fargo & Co., which offer traditional banking services such as checking and savings accounts, also have brokerage options through their units Merrill Edge and WellsTrade, respectively. 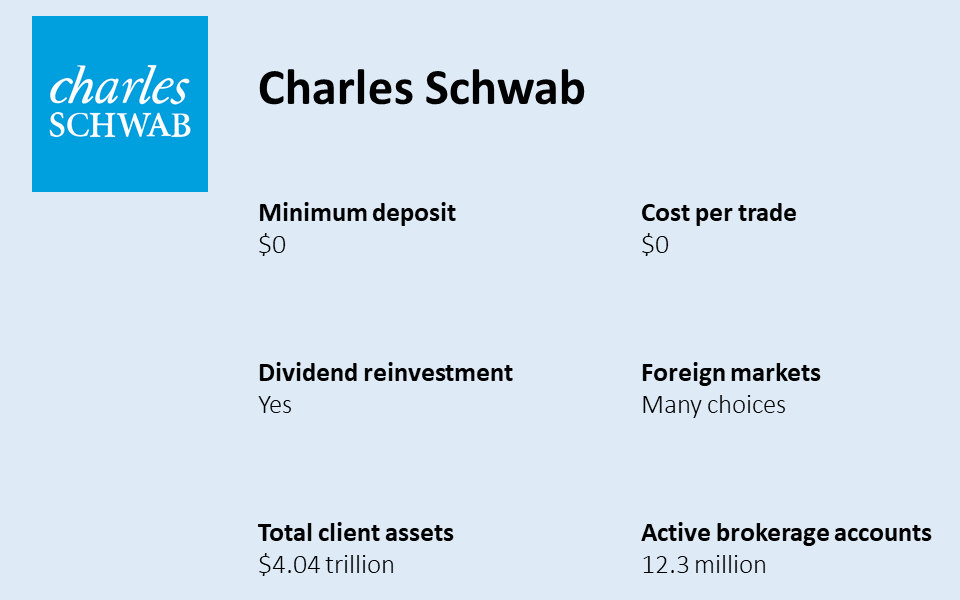 Charles Schwab is known for bringing investing to Main Street after founder Charles Schwab opened its first discount brokerages in 1975. Surveys of brokerages rate the San Francisco, California-based firm highly, and Schwab wins favor from financial content site Bankrate for its low fees for ETFs. Kiplinger gives Schwab high marks for its research, and Investorplace cites Schwab’s website for its ease of use for new investors.

According to the company, it manages a total of $4.5 trillion in client assets and has 14.3 million active brokerage accounts. Schwab was the first major discount brokerage to discontinue online commission fees in October 2019. The firm agreed to buy competitor TD Ameritrade last November in an all-stock deal worth $26 billion. 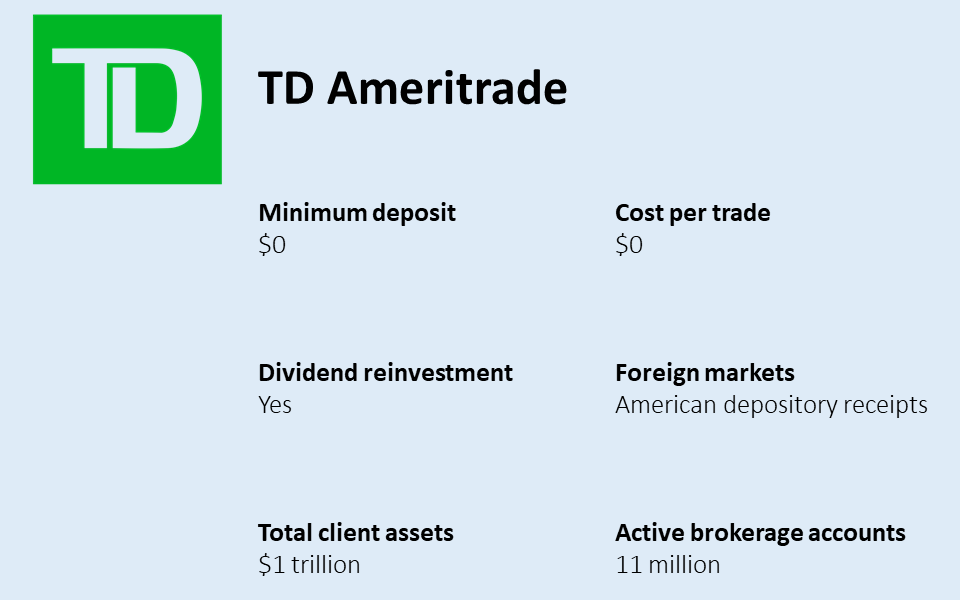 The firm also rates highly among active traders. The broker offers investment tools, education programs that appear on YouTube, and its branch network, which before the pandemic was among the industry’s most extensive. 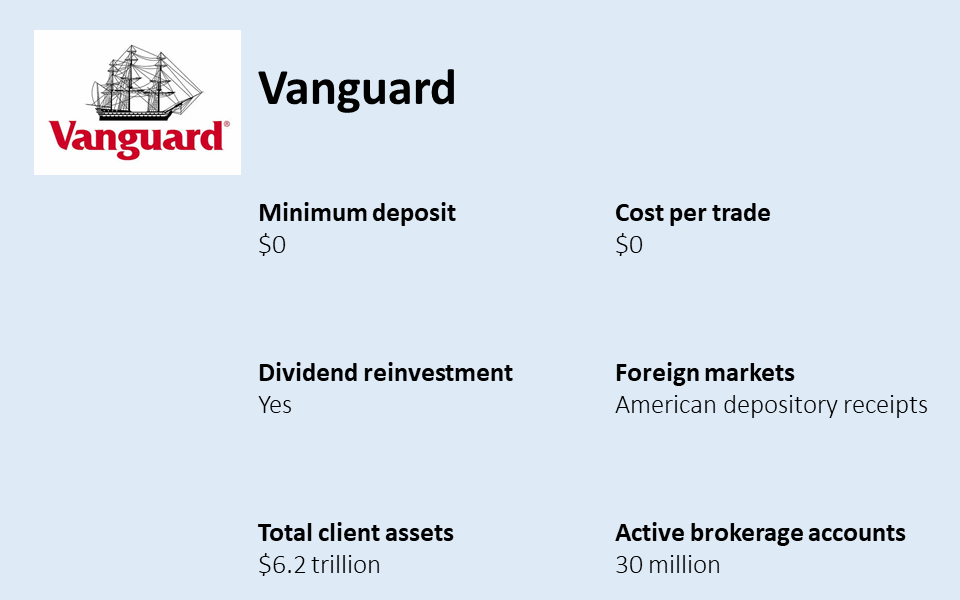 Vanguard Group
The Vanguard Group, founded by visionary investor John Bogle, is based in Valley Forge, Pennsylvania. Bogle transformed the mutual funds business, providing low-cost, accessible mutual funds to investors in what became known as the “Vanguard Experiment.” Vanguard has more than $6.2 trillion in assets under management.

Vanguard is known for its mutual funds offerings, but it also offers complete stock brokerage services. The Balance, Motley Fool, and Investorplace consider Vanguard a good option for those who invest in ETFs and mutual funds. Vanguard has about 190 U.S. funds and about 230 additional funds in foreign markets. The firm does not offer forex or futures trading. 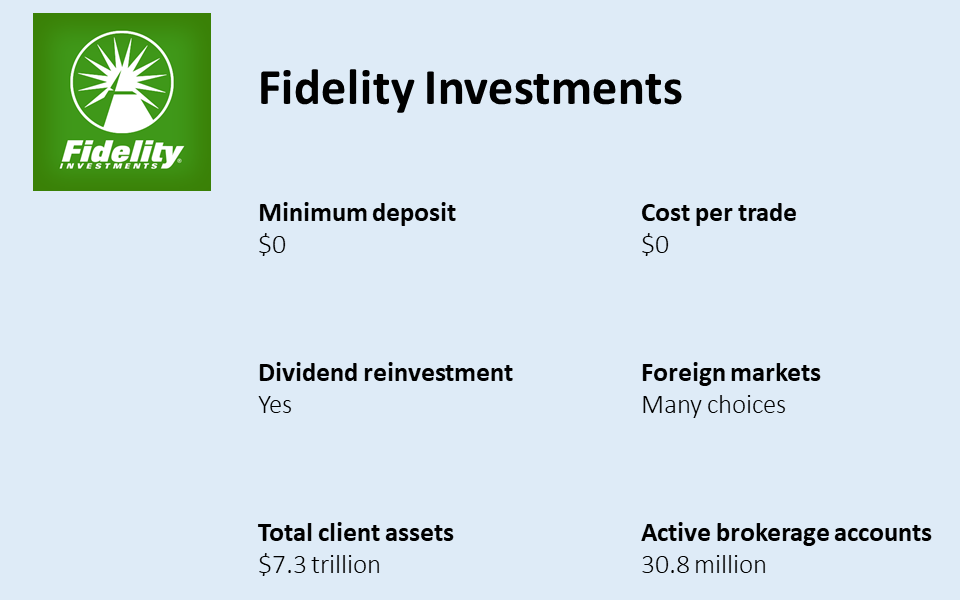 Fidelity Investments is one of the oldest brokerages in the nation, founded in 1946. The Boston, Massachusetts-based firm was named one of the top online brokerages by Investor’s Business Daily earlier this year. The publication gave Fidelity top ranking in equity trading tools, investment research, and mobile trading platform. Fidelity’s size — the firm has more than 40,000 associates — has likely helped it outdistance its competitors in the IDB ranking, boosted by its analyst, advice, and research depth.

New investors pay no annual fees or expenses if their balance is less than $10,000. Once known primarily as a mutual fund firm, Fidelity now offers a wider array of financial services and products. In 2018, the company launched four index funds with no management fees. 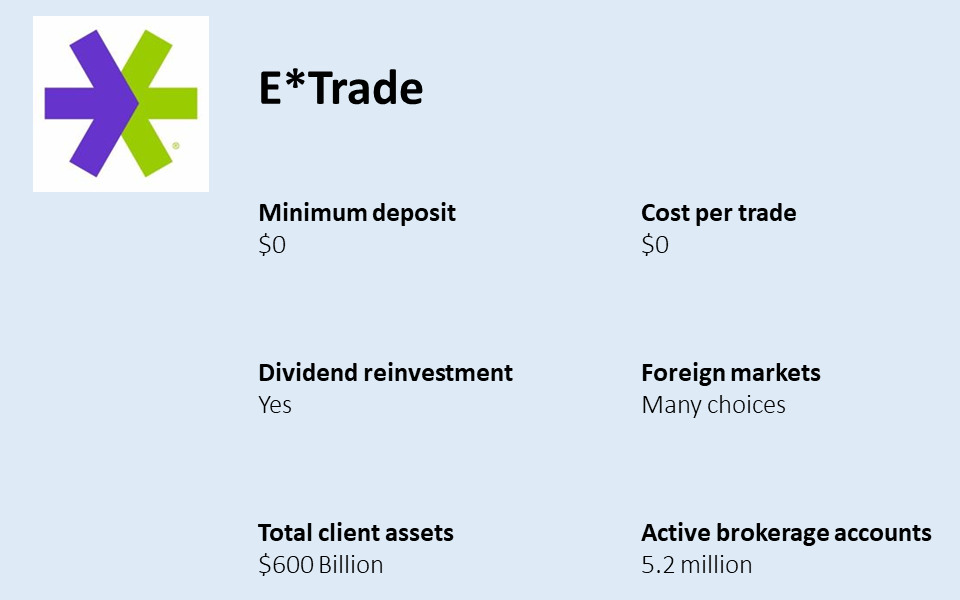 E-Trade was one of the pioneers in online stock trading. The company was founded in 1982 and completed its first online trade the following year. The financial firm became a public company in 1996, and In February, Morgan Stanley announced it was acquiring E-Trade for $13 billion.

The Arlington, Virginia-based firm gets the nod from Barron’s and Kiplinger for its mobile platform. Investorplace cites E-Trade for its access to international markets. E-Trade dropped its online commission fees last October following Charles Schwab move. 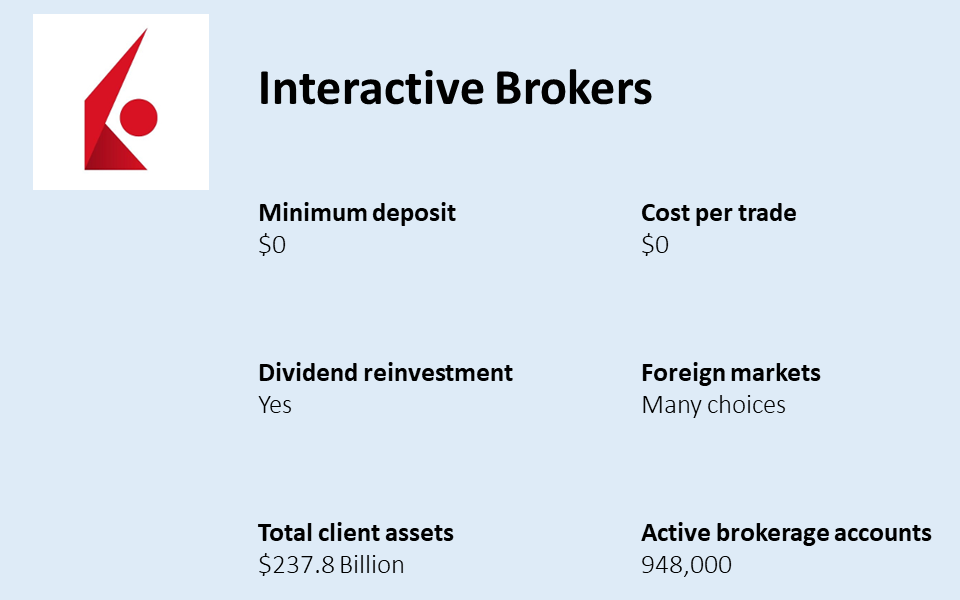 Greenwich, Connecticut-based Interactive Brokers offers an inexpensive option for active traders. Like other large brokerages, it offers commission-free ETF and stock trading pricing structure, but it also offers lower fees on margin, options, or bond trades. Investopedia cites Interactive Brokers as one of the best brokers for advanced traders and international trading.

Interactive Brokers offers trading in options, mutual funds, futures, and foreign exchange. The company reduced its minimum deposit to $0 from $10,000 in 2019. 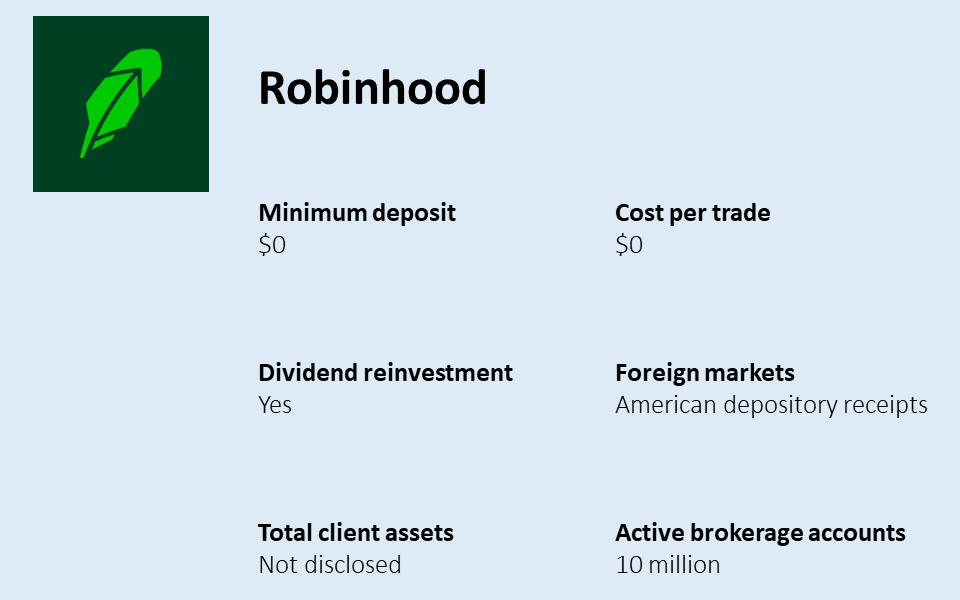 Robinhood’s stated mission “Investing for Everyone” and through its app it has become one of the hottest financial technology companies. Investors can buy ETFs, cryptocurrency, or options without any fees. For smaller investors, Robinhood offers a feature in which customers can invest in fractional shares with an investment as low as $1.

Robinhood, based in Menlo Park, California, and founded in 2012, does not offer mutual funds. Since Robinhood started, the app has added features, according to Motley Fool, which gives kudos to the company for its easy-to-use platform, though it adds that the app does not provide much research. The app also offers a premium account called Robinhood Gold. 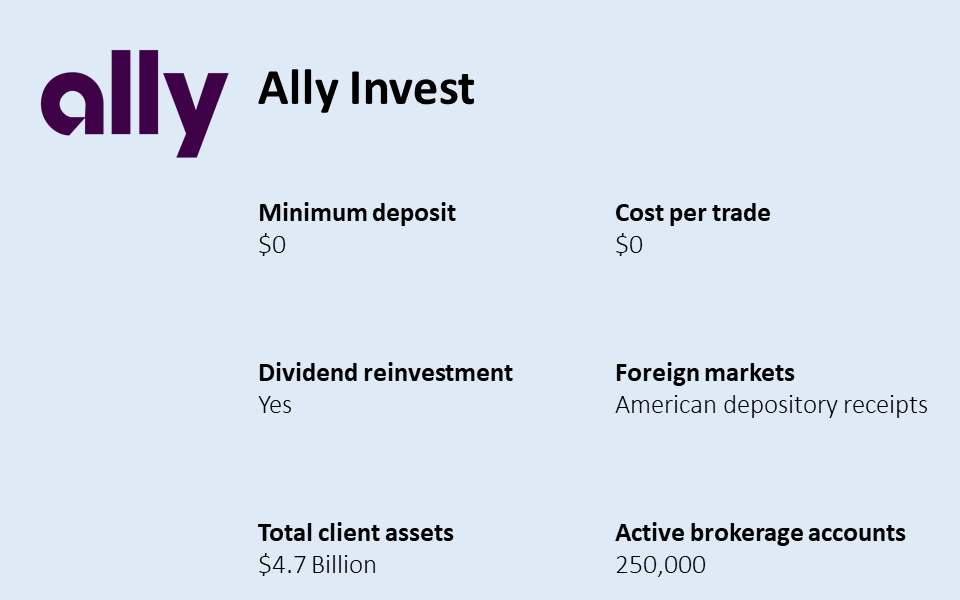 Ally Invest was founded by Detroit, Michigan-based Ally Financial in 2017 and is among the cheapest brokers for self-directed investors. Investorsplace and Kiplinger each cite Ally Invest low fees for attracting beginner investors. There is no minimum required to start an account, and the cost to buy or sell no-load mutual funds is $9.95, considered to be low in the industry.

Stock and ETF trades at Ally have no commission costs. However, its selection of ETFs is limited, according to The Balance. Ally offers traditional banking services such as checking and savings accounts and self-directed and managed investment accounts. 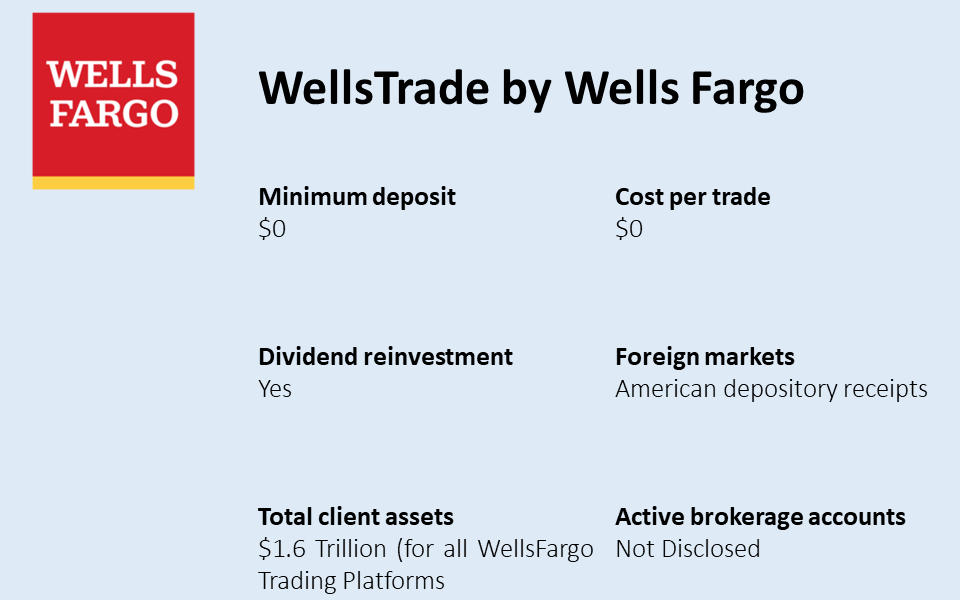 The firm was one of the last brokerages to drop its commission fee rate, doing so in December, several months after rival brokerages discontinued their fees. Considering its fee structure and services it offers, WellsTrade is likely better suited to buy-and-hold mutual fund investors. The firm does not offer a wide spectrum of research material. 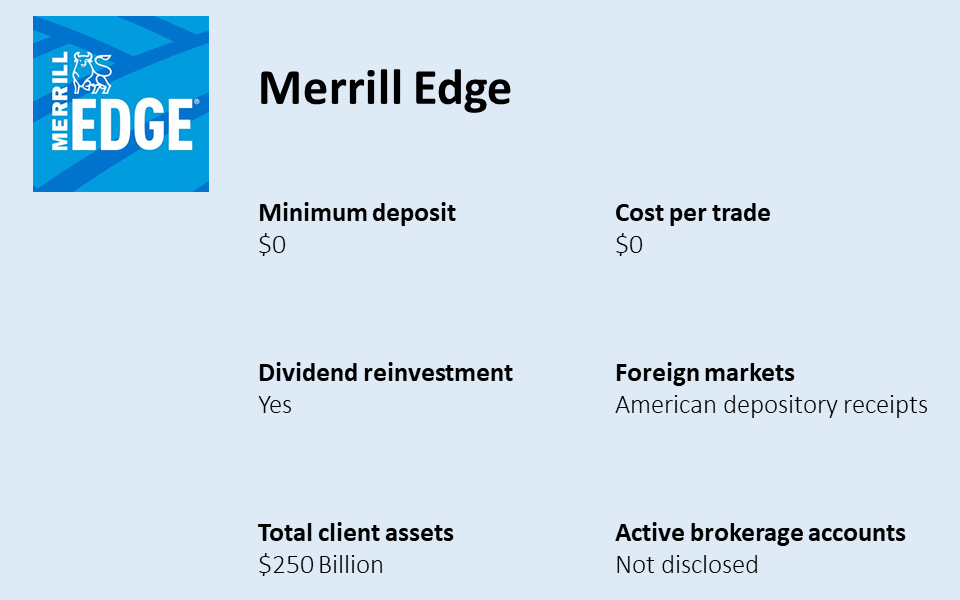 Merrill Lynch, whose focus had been on the more affluent investor, launched Merrill Edge in 2010 to gain access to smaller, DIY clients. Novice investors can open an account with $0 equity and ETF trades, and they can benefit from automatic dividend reinvestment.

Merrill Edge has responded to investor requests to improve the online and mobile investing experience. Kiplinger gives the firm kudos for its website that enables investors to analyze stocks, funds, and their portfolios in clear language and graphics. Because Merrill Edge is a Bank of America company, customers of that institution can access traditional banking services such as checking, savings, and their investment accounts with a single login. 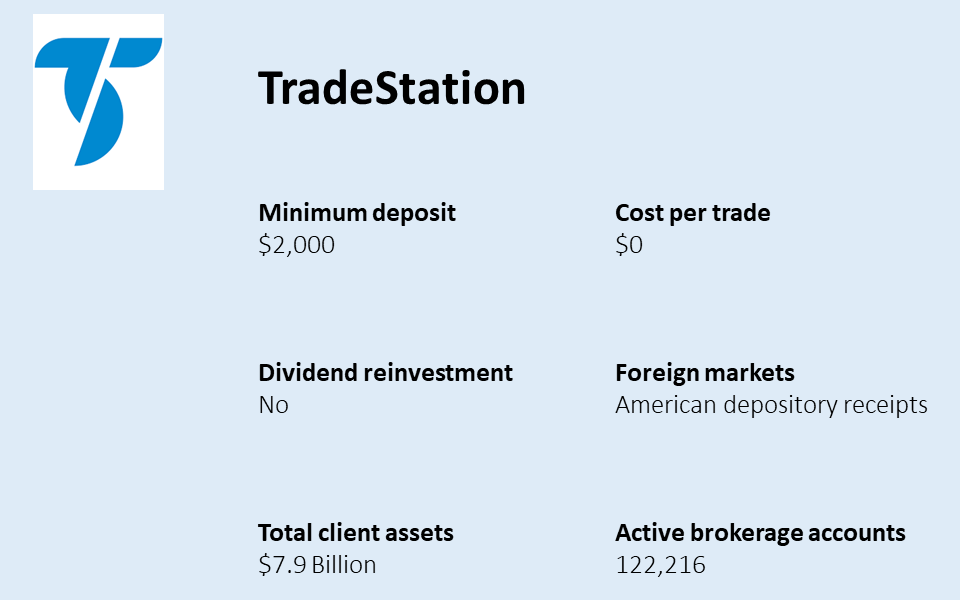 TradeStation, founded by brothers William and Rafael Cruz in 1982, is a brokerage best suited for sophisticated, cost-conscious, and active investors. Motley Fool rates TradeStation highly for its low-cost pricing.

The brokerage can be expensive for smaller investors. For those with accounts of less than $100,000, there is a monthly fee of $99.99. The brokerage is trying to broaden its client base and launched a cryptocurrency brokerage in 2019. 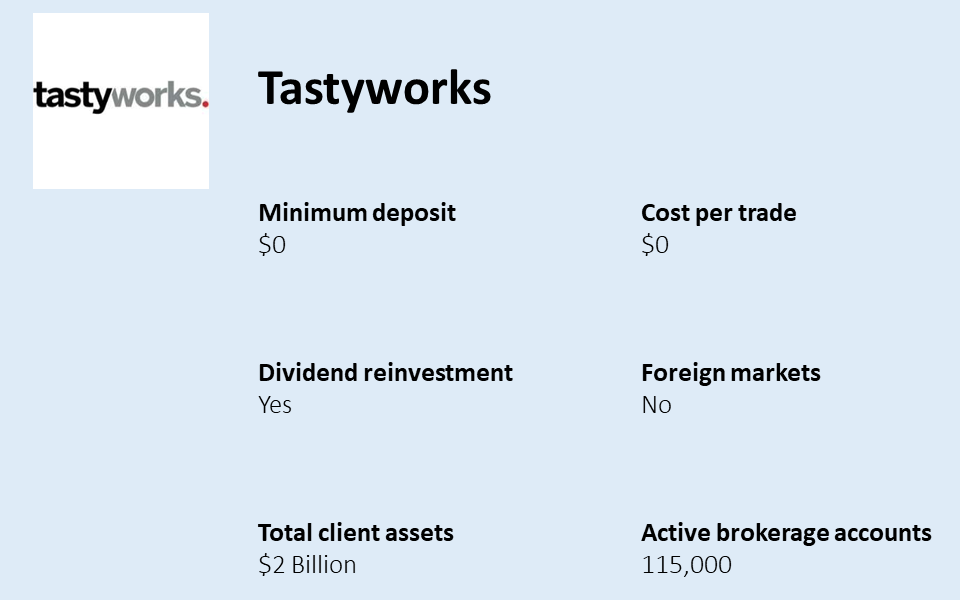 Tastyworks founders say on their website that they were “forged in the fires of physical floor trading” of the Chicago Board Options Exchange in the 1980s. The company says it believes in transparency and do-it-yourself investing and has geared its platform to support DIY clients in options trading, which has risen in popularity in recent years.