The Market for GameStop Is Near a Turning Point

GameStop is one of the most heavily traded stocks on Wall Street for no reason we can think of other than hype. While the company is trying to reinvent itself in a manner that will produce consistent profits the outlook for profitability just isn’t there. The Altman Z-Score, a measure of a company’s risk of bankruptcy, gives a very low chance of insolvency that isn’t enough for us. After reviewing some of the pertinent market data, we think this market is near a turning point and it may not be one the bulls are happy with.

Insider Buys Big, Bets On GameStop For The Win

The most recent surge in GameStop share prices was precipitated by a large insider purchase Chairman Ryan Cohen bought $10 million worth of the shares which is a very small drop in the bucket relative to the market cap but no small amount for any investor. This news suggests he sees better than expected results unfolding, or the stock is undervalued at these levels, but we’re not buying it. Cohen may be trying to add some confidence to the market and if so, he may lose big. Other than himself, we can’t figure out who is buying the stock other than meme-stock speculators and they aren’t a crowd we want to follow.

The institutions are still hanging on to 26% of the shares outstanding but their activity has been net-bearish on a quarterly basis for the last 5 consecutive quarters and dwindled to near zero in Q1 2022. This leaves the market without institutional support at best and in danger of another round of selling at worst. In either case, the institutional activity leaves the stock susceptible to extreme moves driven by news and/or short selling and the short-selling is still vigorous.

The last short-interest report had the interest at nearly 20% and up 5% from the previous month. We can assume that some of that interest was covered during the latest uptick in prices but the technical picture suggests the market was re-shorted at a higher price and the analysts aren’t helping the situation either. There are still two analysts rating the stock, down from 4 last year and 8 the year before, and both of them are bears. The interesting detail here is that one raised the PT to over $140 (way back in December of 2021) while the other lowered the target to $30. This has the Marketbeat.com consensus estimate at $88 and up in the 12 months, 3 months, and 1-month comparisons. The salient point, however, is the consensus target is 40% below the recent price action.

Earnings Are No Catalyst For GameStop

GameStop won’t report earnings again until early June so there will be no catalyst until then. The risk in earnings is that 1) last quarter was weaker than expected despite better than expected revenue 2) the company’s losses are widening and 3) more of the same is forecast for FQ1. What will be a catalyst, are plans for a stock split that could increase the share count by more than 200%. If that comes to pass you can be sure there will be selling in this market.

The price action in GameStop hit another top at the end of March and a lower top than before. Resistance to higher prices is now at the $200 level and we think prices will move lower before they retest that level again. The indicators have fired off a bearish signal that could take price action below the short-term moving average. In that scenario, we see downward momentum building and taking price action down to the $120 and possibly $80 levels. If the stock falls below $80 it could go back down to the pre-meme levels near $15. 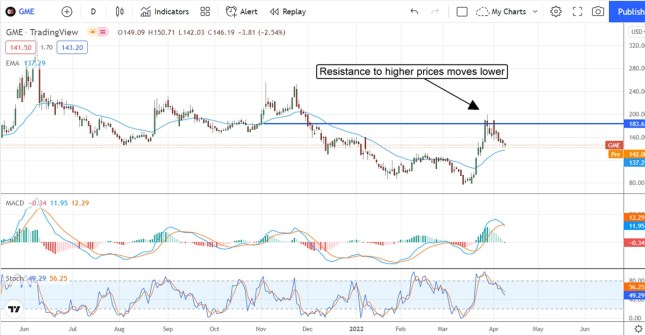 Before you consider GameStop, you’ll want to hear this.

MarketBeat keeps track of Wall Street’s top-rated and best-performing research analysts and the stocks they recommend to their clients on a daily basis. MarketBeat has identified the five stocks that top analysts are quietly whispering to their clients to buy now before the broader market catches on… and GameStop wasn’t on the list.

While GameStop currently has a “Sell” rating among analysts, top-rated analysts believe these five stocks are better buys.