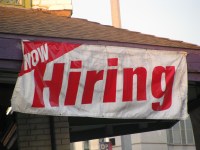 The US Department of Labor said today that the seasonally adjusted number of new claims for unemployment benefits fell by 14,000 in the week ended June 30th, from a revised total of 388,000 for the previous week to 374,000. Economists had been expecting a total of 386,000 new claims.

At the same time, the latest report from ADP indicated that private-sector payrolls rose by 176,000 in June, far better than expectations of a rise of 100,000. The ADP report comes ahead of tomorrow’s non-farm payroll report from the Labor Department, which is expected to show that payrolls grew by 100,000 in June. Non-farm payrolls rose by just 69,000 in May, so the expected improvement might ease some worries about a continued slowdown in the US economy.

Coupled with today’s data from Challenger that June layoffs hit a 13-month low, one might expect that the US unemployment rate would decline in June. Economists, however, are predicting that the rate will remain unchanged at 8.2%.

The US economy may not be improving very much or very fast. But it is improving, not declining, and that’s something.

The unemployment-employment numbers were not strong enough to keep the US markets from declining following remarks by European Central Bank President Mario Draghi that there are still plenty of downside risks to the Eurozone economy following today’s rate cuts. Draghi called out the main risk as weaker-than-expected economic activity. The three major US stock indexes are all down by more than -0.5% after about 45 minutes of trading this morning.