FX Looking to Summer Trio to Win Drama Crown: “The Bridge,” “Tyrant,” and “The Strain” 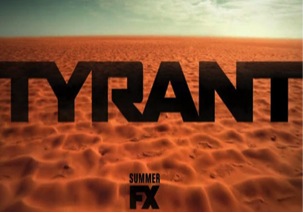 Source: FX
Fox (NASDAQ: FOXA) subsidiary FX’s business model remains the same no matter the season…darker, edgier, grittier. It’s always had a toe in the summer waters with such iconic network staples as Nip/Tuck, Rescue Me, and Damages benefiting from “off-season” debuts, and in the coming weeks will be delivering a trio of dramas to viewers, including its first real attempt at a horror-type series.

‘Bridging’ the Gap
Last year, FX kept its summer slate going strong with The Bridge, a series revolving around a serial killer who taunted authorities by laying out a dead body across the U.S./Mexico border, leading to a cross-border investigation. Starring Oscar nominee Demian Birchir and Diane Kruger, the series was a success and will be returning, though the question is what form it will take.

The source material for The Bridge was basically one-and-done and there was no road map for future seasons. Yet producers believe they have that problem solved and so far audiences and critics seem happy to go along for the ride.  The Bridge was an interesting series to pitch to audiences, but it was true to FX’s core style and could prove even more profitable when the Emmy nominations come out next month.

In addition to hopefully replicating last year’s success, Bridge has to help serve as an anchor series this summer as FX launches a pair of new dramas designed to fill in the holes left as two of the network’s signature series (Sons of Anarchy and Justified) are about to end. Welcome Tyrant and The Strain.

‘Homeland’ 2.0?
Tyrant will be the first of the two and it comes from Homeland’s Gideon Raff and 24’s Howard Gordon along with noted screenwriter Craig Wright (Lost, Six Feet Under).  The series looks at what happens when the self-exiled son of a foreign dictator returns home with his American family for his nephew’s wedding.

Tyrant is not your run-of-the-mill drama, though nothing from Raff and Gordon is. This is a series with a lot of implications for the network because of the cost involved to make it. Unlike FX’s other new summer series, The Strain, Tyrant doesn’t have a “name” lead actor and while Raff and Gordon have solid TV pedigrees, they aren’t as well-known in the mainstream as Strain co-creator Guillermo del Toro.

FX wants to position itself as one of the leading homes for risk-taking dramas despite limitations that rivals HBO and Showtime don’t have to contend with. Part of that positioning applies to the audience and the other half to creative talent. FX initially passed on Homeland and executives didn’t want to make the same mistake twice. Executives knew the message that would send to Hollywood producers and the network’s financial backers, so they went all in on the offer to edge rivals like HBO out of the equation.

FX wants the industry to know it is serious about drama.

If FX is targeting awards season voters with Tyrant, then it’s targeting pop-culture fans with The Strain; it knows it needs all kinds of viewers. From horror maven Guillermo del Toro and his writing partner Chuck Hogan, the thriller looks at a deadly virus that threatens to create a race of vampires. It stars House of Cards breakout Cory Stoll and likely is going to be one of this summer’s “it” series.

This will also be FX’s first real attempt at a horror-type series. Every network wants the next Walking Dead and as executives are learning, it’s not easy. What makes Strain so interesting is that we’ve seen what FX can do with the comedy and drama formats, and if it can infuse its signature style into a genre already known for being dark, this could be a scary proposition for viewers and rival TV networks.

FX has always had its own special strain of uniqueness (pun intended) but with this array of dramas it could really make a mark this summer. This period is not just a dead zone and now that the industry is learning that, the business model for the season will never be the same.

You Will Turn Off Your TV
Television could soon be on its way out. And you’re going to be thrilled. Because that means… as soon as 2014, you could ditch your cable company… along with all the headaches.

But that also means the $2.2 trillion entertainment industry is up for grabs. And these analysts know which three companies are poised to hijack your cable provider’s profits. A new FREE report details everything you need to know to line your pockets as cable crumbles.