Facebook Inc. (NASDAQ: FB) has announced that it removed over 3 billion fake accounts from its platform between October 2018 and March 2019. What’s even more is that this number is twice the size of the number from six months prior to October.

Note that nearly all of these accounts were caught before they had a chance to become “active” users of the social network.

In dealing with these offenses, Facebook is taking down posts, muting users and even deleting users.

According to Facebook’s release:

For fake accounts, the amount of accounts we took action on increased due to automated attacks by bad actors who attempt to create large volumes of accounts at one time. We disabled 1.2 billion accounts in Q4 2018 and 2.19 billion in Q1 2019. We’ll continue to find more ways to counter attempts to violate our policies and Alex Schultz explains more about how we address fake accounts in a Hard Questions blog we’ve also shared today…

In six of the policy areas we include in this report, we proactively detected over 95% of the content we took action on before needing someone to report it. For hate speech, we now detect 65% of the content we remove, up from 24% just over a year ago when we first shared our efforts. In the first quarter of 2019, we took down 4 million hate speech posts and we continue to invest in technology to expand our abilities to detect this content across different languages and regions. 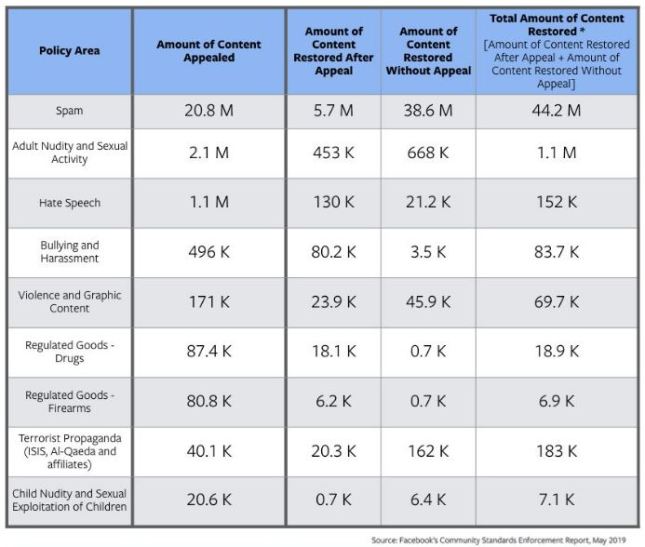