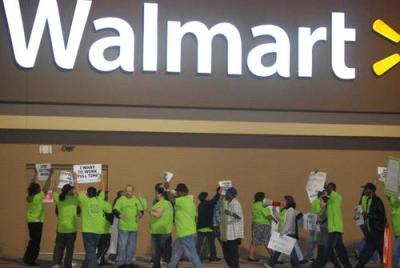 Source: courtesy Making Change at Walmart and UFCW
Employees of Wal-Mart Stores Inc. (NYSE: WMT) began their promised job walkouts last night at Walmart stores in Miami, Dallas, Wisconsin and the San Francisco Bay area. The job actions are part of a planned protest against the store’s efforts to retaliate against workers who speak out for better working conditions and pay.

The walkouts and protests are being led by a group called OUR Walmart, which receives support from the United Food and Commercial Workers union (UFCW).

Walmart filed a complaint late last week with the National Labor Relations Board (NLRB) for an injunction against the labor protests, claiming that the actions are violate U.S. labor laws. No ruling on that complaint has been issued yet.

The protests are expected to spread to more than 1,000 Walmart stores in 46 states on what is traditionally the busiest U.S. shopping day of the year.