Will Holiday Shopping Turn Wal-Mart Around? 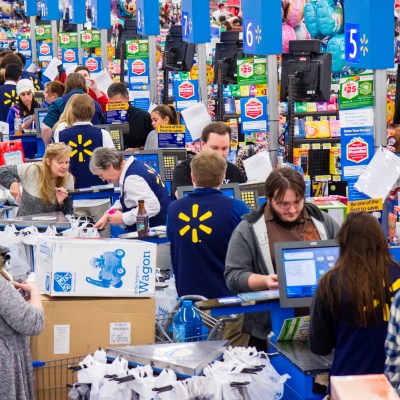 Source: courtesy of Wal-Mart Stores Inc.
It’s been nearly two weeks since Wal-Mart Stores Inc. (NYSE: WMT) plunged 10% on an announcement from the company that fiscal year 2017 profits would decline by as much as 12%. And although the pace of the drop has slowed, the giant retailer posted another 52-week low on Friday. Can the coming holiday season stop the bleeding?

This year’s holiday shopping season does not appear to be much better than last year’s. The National Retail Federation (NRF) has said that a survey of consumers indicated average spending per person this year will be $805.65, up just $3.20 compared with 2014. Almost half (46%) of holiday browsing and spending will take place online, up 2 percentage points over last year.

Some retail analysts are blaming the year-over-year flatness to a lack of exciting new (and expensive) products. That means the holiday shopping season will be all about promotions and there’s scant profit there.

At website BestBlackFriday.com, Wal-Mart gets the nod as the winner of the Black Friday shopping sweepstakes:

They are going to run three different doorbuster events, the first starting on Thanksgiving night. They will also bring back their hugely popular ad match and 1-hour guarantee. The ad match means they will literally match the price that any competitor is offering for the same product, in retail stores only. The 1-hour guarantee means that if any of the top doorbusters available during Event 1 are sold out in the first hour before you have a chance to purchase them, Walmart offers you a limited window to buy them after Black Friday at the same price. While other stores will be opening at 4 p.m. on Thanksgiving or earlier, Walmart is likely to stick to their 6 p.m. opening time for Event 1.

The overall Black Friday discount is forecast at 39.55%, according to BestBlackFriday, and the shopping site expects a Wal-Mart discount range 30% to 35%. By comparison, the expected discount at J.C. Penney stores is projected at 60% to 65%, with discounts at Macy’s and Sears averaging 50% to 55%.

ALSO READ: 10 Most Profitable Companies in the World

Total Black Friday spending totaled $9.1 billion a year ago and is expected to reach just $8.8 billion this year. Thanksgiving Day spending is expected to rise from $3.19 billion a year ago to $3.79 billion this year. Retailers appear to be pulling Black Friday sales forward rather than actually raising them: the two-day total for last year is $12.29 billion and the two-day estimate for this year totals $12.59 billion.

The short answer to our earlier questions is that the 2015 holiday shopping season is not likely to provide much solace to Wal-Mart executives or investors. The stock closed down about 1% Friday at $58.30 after posting a new 52-week low of $58.22. The 52-week high is $90.97.