Great American Companies That Will Survive the Fiscal Cliff 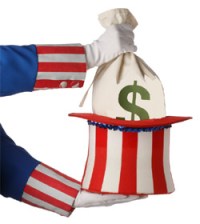 The coming fiscal cliff represents a huge hurdle for America. Government and private sector forecasters have warned that the expiration of tax cuts, along with hundreds of billions of dollars in government spending cuts, could throw the United States back into a recession. Fed Chair Ben Bernanke and the nation’s business leaders have issued warning after warning that this is one of the largest risks out there, and a lack of resolution has made investing and hiring plans much more difficult.

If government spending is about to get chopped, and if the public is about to suddenly face higher taxes in general, it is no secret that investors would have to be cautious. After the run we have seen in stocks, it leaves very few safe places for Joe Public to invest in at a time when Treasury notes and bonds offer investment yields so low as to be insulting. 24/7 Wall St. has identified several key companies in defensive investment sectors that likely would maintain investor interest during such a risky period.

Companies with heavy government contracts are instantly out. Companies that are highly dependent on an optimistic consumer or that offer goods that the public can easily cut back on were also eliminated. Another issue, one which eliminated many great companies, is that Wall St. analysts had to have a consensus price target from Thomson Reuters that was higher than a share price today. Preference was given also to those companies that offer a dividend, as dividends create a return on capital for investors when uncertainty may be much higher than normal.