Seven Cars Most Likely to Be Dumped 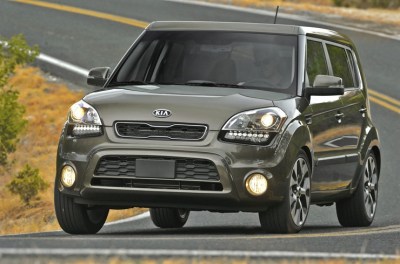 Source: courtesy of Kia Media
Most people buy a car with the goal of getting as much out of it as possible before trading it in. However, a test drive can only reveal so much, and a car can end up being disappointing or unreliable. In these instances, a car may have to be traded in sooner than planned.

According to information released by car data site Edmunds.com, the brand of vehicle you buy may determine how long you will keep your vehicle — whether you will own it for less than four years or more than seven. The average age of a Buick traded in during 2012 was 7.47 years. The average Smart vehicle traded in during 2012 was just 3.09 years. Based on the average trade-in age of the major car makes sold in the United States, these are the cars Americans are most likely to trade in.

One factor that may contribute to people turning in these cars sooner than most is dependability. Based on the 2013 J.D. Power Initial Quality Study, which measures the number of reported problems new owners have with their cars, five of the car brands had more reported problems per 100 vehicles than the industry average. Mini and Smart were worst and third worst, respectively, among the 34 makes surveyed by J.D. Power.

While dependability appears to be a factor for the brands with shorter trade-in timelines, the actual age of the brands may also be a factor. Cars with older average trade-ins, such as Buick, Lincoln and Chrysler, have had a major presence in the U.S. for decades. Companies with shorter trade-in times, such as Smart and Scion, are relatively new in the United States. One factor that likely leads to Smart cars having a lower average trade-in age is that most of the Smart cars in the country are less than five years old.

Two cars that were among the most likely to be returned are owned by drivers that can afford to get the newest model. While Porsche and Land Rover were owned for less than five years on average, both cars have among the highest loyalty ratings; drivers are much more likely to buy another Porsche or Land Rover than most other cars.

24/7 Wall St. reviewed Edmunds.com data on the average trade-in time on the 32 largest U.S. vehicle makes in 2012 to identify the car brands that are turned in in less than five years. Edmunds.com provided us with U.S. sales and market share, as well as the average time on lot for 2012. Edmunds.com also provided brand loyalty data, which represents the percentage of drivers trading in a car who planned on buying the same make or model they owned. For each of these models, we also reviewed J.D. Power’s Initial Quality and Dependability study, which measures the number of complaints by make per 100 vehicles both for new owners and those who have owned the vehicle for three years.

These are seven cars most likely to be sold, returned, or, to put it another way, dumped.