The 10 Lowest-Paying Jobs for College Graduates 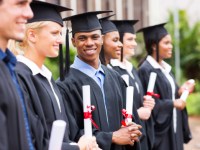 Source: Thinkstock
College students who graduated with student debt in 2012 owed an average of nearly $30,000, according to a report from the Institute for College Access and Success. While such a debt burden can be managed with a high-paying job, some jobs that require at least a bachelor’s degree do not pay more than the median salary for all workers.

The health of the job market certainly has an impact on starting salaries of students, but some people willingly choose careers that generally do not pay well. 24/7 Wall St. reviewed wage data from the Bureau of Labor Statistics’ (BLS) Occupational Employment Statistics (OES) database to identify the 10 occupations that require at least a bachelor’s degree and pay the least.

Having a degree typically improves the earnings prospects of graduates, yet many of these occupations paid little more, if not less, than the median for all jobs in 2013. While the typical American worker earned $35,080 in 2013, only one of the lowest-paying jobs for college graduates, museum technicians and conservators, paid a median wage of more than $40,000 last year. Legislators, whose occupation was the lowest-paying for college graduates, had a median pay of just $20,620.

Many workers in these relatively low-paying jobs may be motivated by factors other than pay. Museum technicians likely choose their profession because they have some interest in preserving items. Similarly, religious directors, rehabilitation counselors and recreation workers may be more inclined to help people. According to Martin Kohli, chief regional economist with the BLS, “There are always going to be people who choose careers for reasons other than money.”

Other jobs, such as graduate teaching assistants, are temporary. “Those are things that people typically do for a year or two [before] they will hopefully go on and graduate,” said Kohli.

To identify the jobs that require the most education but pay the least, 24/7 Wall St. reviewed wage and employment data from the Bureau of Labor Statistics’ 2013 Occupational Employment Statistics database and job descriptions from the Occupational Outlook Handbook. We screened for jobs that require at least a bachelor’s degree, according to the BLS. We also looked at job descriptions from the O*Net Online database, an occupational information database developed by the Department of Labor. Figures from the OES do not account for self-employed workers.

These are the jobs that require the most education and pay the least.