In 2013, only 7% of American adults said they were marijuana users. Today, less than three years later, usage rates have nearly doubled, as 13% of U.S. adults say they smoke pot — according to a recent Gallup poll. Despite what appears to be growing acceptance of the drug, the DEA recently reiterated marijuana’s classification as a Schedule 1 substance, in the same category as heroin, LSD, and ecstasy.

Reflecting the increasing acceptance of the drug, and in direct conflict with the DEA’s conclusion, some states have dialed down their marijuana laws in recent years. Prohibited across the country less than five years ago, marijuana is now legal and regulated in Alaska, Colorado, Oregon, Washington, and the District of Columbia. While it may be too early to gauge the social and economic impact of full scale legalization in these places, more than a dozen other states could foreseeably repeal marijuana prohibition in the coming years.

24/7 Wall St. revisited last year’s list of states most likely to legalize recreational marijuana. We again reviewed current marijuana laws as well as legislative processes in each state. The path to legalization is long, complex, and often very different in each state. Changing circumstances led to the addition of several states, including Arizona and Illinois, while Minnesota was the only state on last year’s list that was not included this year.

Click here to see the 14 next states to legalize pot.

A state’s legislative process is an important factor in the state’s path towards legalization of marijuana. In an interview with 24/7 Wall St., Morgan Fox, senior communications manager with Marijuana Policy Project, a marijuana legalization advocacy group, explained, “Traditionally, voters have been far ahead of politicians when it comes to supporting marijuana policy reform.” As a result, states that allow ballot initiatives, through which statutes and constitutional amendments can be proposed by voters, are more likely to legalize marijuana sooner than states that do not allow ballot initiatives.

The four states that have legalized recreational marijuana use have done so through ballot initiatives. And this November, voters in Arizona, California, Maine, Massachusetts, and Nevada will also vote on ballot initiatives that would repeal prohibition of the drug.

However, just over half of states do not allow such ballot initiatives, and many lawmakers perceive marijuana reform as too politically risky. According to Fox, this is beginning to change. In many states, including Vermont and Rhode Island, voters are not likely to punish politicians for being perceived as soft on drugs if they are in favor of marijuana law reforms. In states such as these, possession of a small amount of pot is already decriminalized and marijuana use is legal for those with certain medical conditions.

Relatively high usage rates among voting-age adults in these states also suggest a tolerant attitude towards the drug. In Vermont, for example, more than one in five adults have used marijuana in the past year, the second highest rate in the country.

While not a critical step towards full-scale legalization, states that allow marijuana use for medical reasons are also more likely to repeal prohibition. Not only does legal medicinal use reflect a relatively tolerant attitude towards the drug, but also it can help voters better understand the issue. “One of the potential benefits of having a functional medical marijuana program is that voters are able to see what a regulated marijuana industry looks like,” Fox said. This in turn can help people “envision what it would look like under a legalized system.”

Marijuana legalization is hotly debated, and states that have legalized the drug’s recreational use have gone about it in different ways. In Colorado, the campaign that eventually led to legalization argued for marijuana as a safe alternative to alcohol. By contrast, in Washington, advocates argued marijuana should be legalized because it is not safe and therefore should be regulated. They argued further that processing the numerous marijuana cases was an unnecessary burden on the justice system.

To determine the next states most likely to legalize recreational marijuana, 24/7 Wall St. reviewed existing marijuana laws in each state. To be considered, a state needed to have already legalized medicinal marijuana. Of those 25 states, a state needed to have either decriminalized possession of small amounts of pot, or allow ballot initiatives that can lead to legalization. Only 14 states met these criteria. State marijuana laws came from the National Organization for the Reform of Marijuana Laws, and marijuana use and perceptions of risk came from the Substance Abuse and Mental Health Services Administration. In states that have not decriminalized marijuana, maximum fines are listed for the smallest amount penalized for first-time offenders.

These are the next states to legalize marijuana. 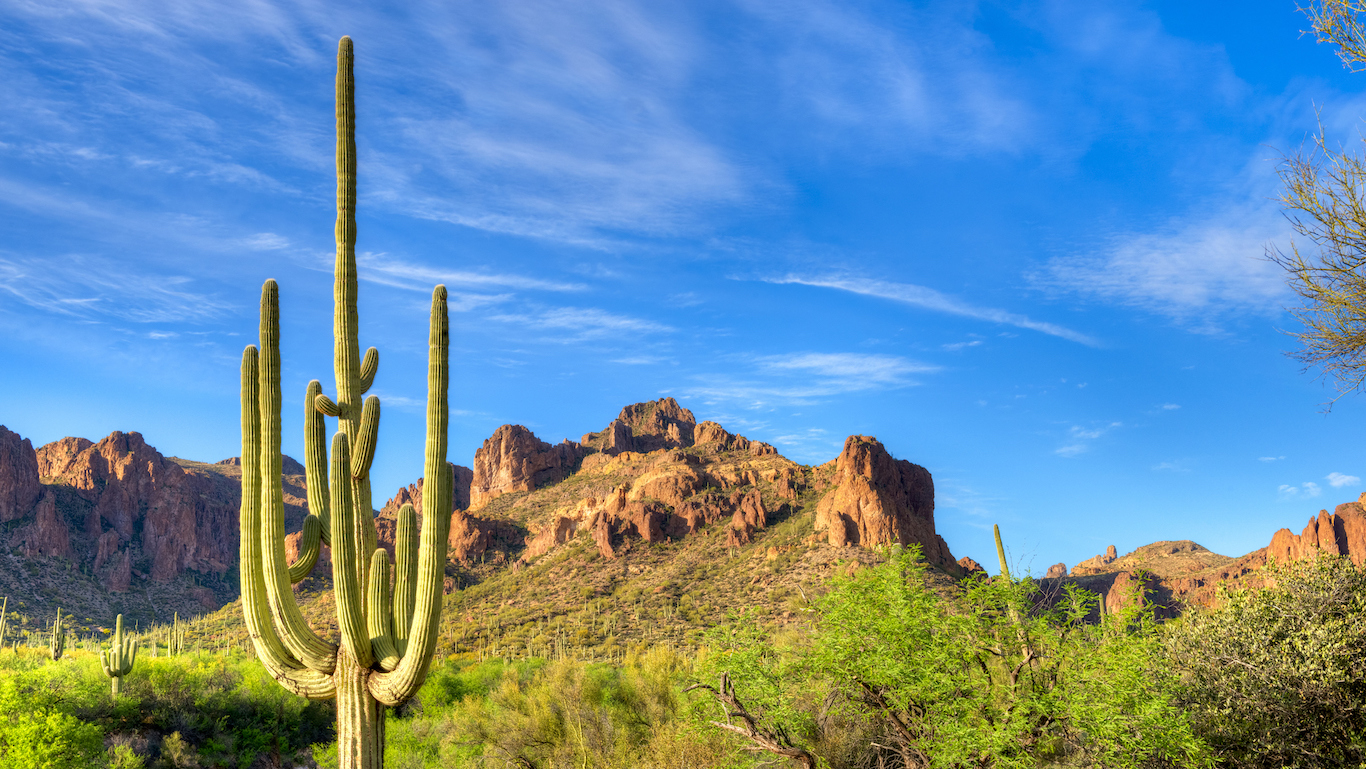 Currently, penalties for marijuana possession in Arizona are among the most severe in the country. Arizona is the only state where a person possessing any amount of marijuana can face felony charges. In addition, possession can lead to a two-year prison sentence and up to a $150,000 fine.

Despite the draconian laws, Arizona may well be the next state to legalize recreational marijuana. State voters submitted more than enough petition signatures to the Secretary of State in late June to include a measure on the ballot in November to end marijuana prohibition and effectively regulate the drug like alcohol. If passed, the provision would allow adults 21 and older to possess up to an ounce of marijuana. A report released by the state’s Joint Legislative Budget Committee estimates that legalizing marijuana would generate $82 million in additional tax revenue annually.