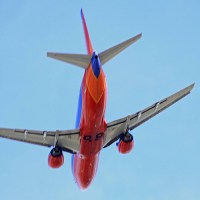 Southwest Airlines Co. (NYSE: LUV) has taken a bit of a blow to its safety reputation after this last weekend.  A few hundred flight cancellations are one thing, but a hole ripping open during flight is probably enough to make many travelers just want to stay home.

There is a silver-lining to this story.  After the review of the planes, the same cracks were found only in five other 737-300 airplanes made by Boeing Co. (NYSE: BA).  Those are due to stress from pressurization and depressurization as planes have to pressurize their airplane flight cabins so that we humans can keep breathing.

Perhaps the biggest issue for shareholders right now, feelings and emotions aside, is this pending acquisition of AirTran Holdings Inc. (NYSE: AAI).  This merger is almost certainly safe.  We have a projected Q2-2011 closing and the good news about Southwest here today is that this happened right at the start of the quarter rather than in the last month.

Southwest shares were above $12.80 on Friday and they dipped as low as under $12.30 on Monday.  Even today, the shares are challenging $12.40.  AirTran shares have hardly budged.  The original deal came to $7.69 per AirTran share, and that was broken down as $3.75 per share in cash and the balance was in stock with 0.321 per share worth of Southwest stock.  That puts the current buyout price at $7.73 in a static line if the deal closed today and AirTran shares are now at $7.44.

Having a hole rip open in your airplane is scary.  The only good news that can be offered up with a straight face is that thankfully this was not an actual plane crash.  Southwest still has one of the best safety records.  This AirTran acquisition is going to deviate the company’s traditional ONE-PLANE MODEL ONLY business model.  That may generate some headaches, but the move is still one which can be managed.  Some carriers have more than ten types of airplanes in the fleets.

Unless there is some hidden turmoil that has not been disclosed, Southwest will recover from this latest challenge.  That means that AirTran holders will become Southwest shareholders if they choose to.  AirTran was under $4.50 when the buyout was announced versus $7.44 today.  The spread still seems a tad wide, but that is often the case in cash and stock deals as arbitrage players have a bit more to consider versus straight cash or straight stock mergers.

Is The Boeing 737 MAX Unsafe At Any Speed?

UPS Fails to Deliver in Q3

Southwest, Alaska, American Airline Earnings Could Have Been a Lot Worse