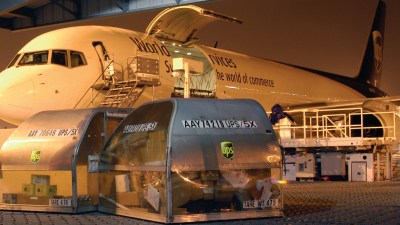 For the quarter, the package delivery giant posted adjusted diluted earnings per share (EPS) of $1.32 on revenues of $14.57 billion. In the same period a year ago, the company reported EPS of $1.28 on revenues of $14.17 billion. Fourth-quarter results also compare to the Thomson Reuters consensus estimates for $1.38 EPS and $14.43 billion in revenues.

On a GAAP basis, UPS reported a quarterly EPS loss of $1.83 related to a $3 billion noncash after-tax charge for pension benefits. On a GAAP basis for the full year, EPS totaled $0.83. The company also estimated that the effects of Hurricane Sandy reduced EPS by about $0.05.

2012 presented its challenges, most notably weak global trade. Nonetheless, UPS executed well, delivering superior service to customers. Despite modest macro growth expectations for 2013 and uncertainty in the U.S. caused by the lack of progress in Washington, the UPS business model will deliver consistent results, with operating profit growth in all segments.

UPS noted that spending during the recent holiday season was “slightly below expectations.”

The company also officially announced yesterday that it had dropped its bid for TNT Express, following an EU decision prohibiting the proposed acquisition.

More Than 74 Million People Will Travel Over 4th of July

Cities Where Car Travel Is Surging

Is Now the Time to Add a Top-Rated Airline Stock?

This Is The Most Traveled Country Before The Pandemic