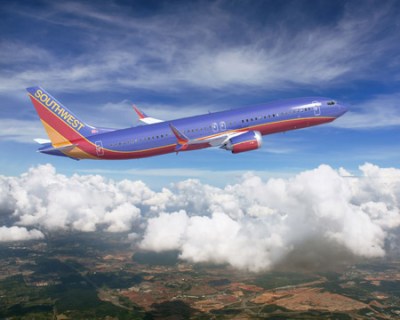 Source: courtesy Boeing Co.
Southwest Airlines Co. (NYSE: LUV) reported fourth-quarter and full year 2012 results before markets opened this morning. For the quarter, the airlines posted adjusted diluted earnings per share (EPS) of $0.11 on revenues of $4.17 billion. In the same period a year ago, the company reported EPS of $0.20 on revenues of $4.11 billion. This morning’s results also compare to the Thomson Reuters consensus estimates for EPS of $0.08 and $4.21 billion in revenues.

Our [annual] profits … grew 26 percent as compared to 2011 and represented our 40th consecutive year of profitability. … These solid earnings were achieved despite significant efforts and costs related to critical strategic initiatives. I expect these initiatives to produce substantial returns over the next several years.

Southwest provided little guidance for the coming quarter and year. The company did say that “based on current bookings and revenue trends, [Southwest] expects a solid year-over-year increase in its first quarter 2013 unit revenues.” The consensus estimate calls for EPS of $0.07 on revenues of $4.11 billion. In the first quarter of 2012, Southwest posted a net loss of $0.02 per share on revenues of $3.99 billion.