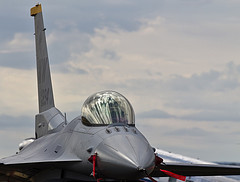 Source: Courtesy Lockheed Martin Corp.
Lockheed Martin Corp. (NYSE: LMT) reported first-quarter 2013 results before markets opened this morning. For the quarter, the defense firm posted diluted earnings per share (EPS) of $2.33 on revenues of $11.1 billion. In the same period a year ago, the company reported EPS of $2.03 on revenues of $11.3 billion. First-quarter results also compare to the Thomson Reuters consensus estimates for EPS of $2.04 and $10.31 billion in revenues.

The effects of the federal government’s sequestration of $85 billion in spending has been a major concern for Lockheed and other defense contractors. Lockheed now estimates the impact of sequestration will reduce net sales in 2013 by $825 million, and the company has adjusted its full-year revenue outlook as a result.

For the 2013 fiscal year, Lockheed now expects sales at the low end of the $44.5 billion to $46 billion range it announced in January. The company did not lower its forecast for full-year EPS from the January range of $8.80 to $9.10. The consensus estimate for the year calls for revenues of $45.12 billion and EPS of $8.92, roughly the mid-point of the company’s announced ranges.

It is worth noting that the consensus EPS estimate for Lockheed rose by $0.10 over the past 90 days. Overall, the sequester has had little impact on earnings to date and the future impact looks to be manageable.

While the impact of sequestration on our business has been limited to date, we continue to work closely with our customers to better understand the future impact sequestration may have on our programs.

Lockheed’s largest segment, aeronautics, saw a 14% drop in revenues year-over-year due to fewer deliveries of the company’s F-16 and C-130 aircraft. Operating profit was essentially flat to a year ago, and operating margins rose from 10.4% in 2012 to 11.9% in 2013.

The company’s information systems and global solutions segment experienced a profit increase of just 1% year-over-year, while profits and margins were flat. This segment of the company, which includes Lockheed’s cybersecurity work, should probably have done better.