Source: Thinkstock
Short sellers are an interesting lot. They may be betting against the market or against a specific stock, but they are a necessary and useful aspect required for most markets. GenCorp Inc. (NYSE: GY) is a stock that 24/7 Wall St. recently featured as one of nine stocks that could double in 2014. This comes with many risks and caveats, and it also is in direct competition with a massive number of short sellers.

GenCorp is a stock that remains unknown to most investors. Its main story is its Aerojet Rocketdyne unit, but the company also has a lot of balance sheet value as a land bank with thousands of acres that may be developed around Sacramento, Calif. Both aspects of the company come with great upside, as well as controversy and risk.

To list a stock as a possible double comes with severe risks, particularly if the stock had already made such a huge move. The risks here cannot be ignored, but fortunately GenCorp does have put options that trade against the stock. A potential rocket retooling for the Minuteman nuclear missiles could bring in billion in potential revenues, as could other rocket pacts in the years ahead. The land bank value could also unlock major value here.

The risk on the rocket-based orders is that they could be delegated elsewhere or the project could simply be scrapped or delayed endlessly. Defense stocks could also run into any variety of budget issues. Unlocking the value of the land assets is also no assured event, because permitting, and a myriad of other issues that are too many to go into, could get in the way.

These risks have the short sellers seriously betting against the company. Having almost 20 million shares short is actually around 34% of the float. Keep in mind that GenCorp has a mere market value of $1.15 billion. There are also almost no analysts covering the stock — Zacks Equity Research has a Buy rating and Oppenheimer issued an Outperform rating almost a year ago.

GenCorp shares were up marginally on Friday on news that Aerojet Rocketdyne successfully propelled the fifth GPS military navigation satellite into orbit.

Supposedly about 99% of the stock is owned by institutions, with almost no retail ownership. The reason that short sellers could ultimately send GenCorp into the stratosphere is that most short sellers eventually reach a breaking point if a position keeps going against them. GenCorp’s stock price was at $17.00 when we included it as one of the nine stocks that could double in 2014, and the stock has hit yet another multiyear high above $19.00 on Friday.

If short sellers decide they cannot take the pain any longer, this could create a serious short squeeze situation. If you want more evidence, the recent volume has been averaging just under 500,000 shares. This means that perhaps 40 days worth of trading volume could have to buy the stock, or at least the portion of the short interest that cannot afford to stay short. The flipside of this case is obvious — short sellers are betting that GenCorp shares will absolutely crater.

GenCorp is a high-risk company. It is nothing short of being a battleground stock. And it could still have major upside if either big upside scenario plays out in its favor. 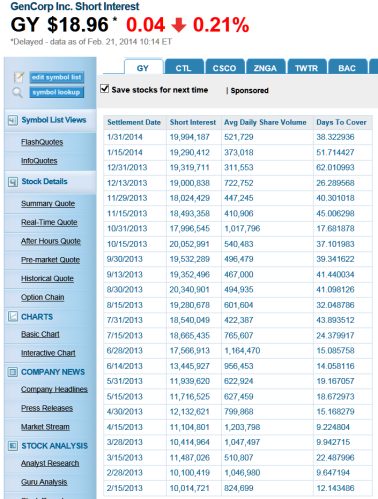