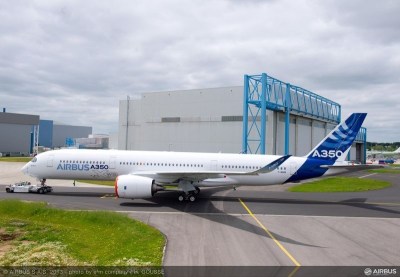 Source: Courtesy EADS/Airbus
When there are only two companies that make a very expensive product, any time there’s a chance to take a big order, well, it is a very big deal. Delta Air Lines Co. (NYSE: DAL) has given Boeing Co. (NYSE: BA) and Paris-traded Airbus Group just such a chance.

The airline sent both airplane makers a request for proposal for up to 50 wide-body (dual-aisle) jets to replace some of the oldest planes in Delta’s fleet. The company is particularly interested in replacing its 16 four-engine 747s and replacing them with the new twin-engine wide-bodies, Boeing’s 777 and 787 and Airbus’s A330 and A350 models. Delta has also said that it wants to sell some of its twin-engine Boeing 767-300ERs.

Delta has said that it is not interested in buying planes that are still in development, which would appear to exclude Boeing’s 777X series and the longer range A330s currently under development at Airbus. Delta already has an order in with Boeing for 18 787 Dreamliners. The order was placed by Northwest Airlines before its 2008 merger with Delta.

Because Delta and the other airlines never pay list prices, the airlines can expect a discount of 25% to 30%, and if Delta were to go with just one aircraft maker the discount could be as much as 60%. At a standard discount of 25%, the A330-300 might cost $184 million, compared with $240 million for a Boeing 777-300ER. How far could/would Boeing lower its price to win the business? The 777-300ER is one of Boeing’s highest priced planes and one of its best sellers.

In addition, Boeing and Airbus are also battling for a contract to supply South Korea with military refueling tankers.