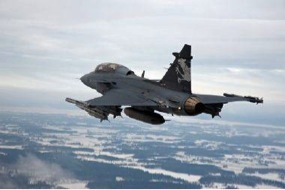 Source: Photo: Saab
Last year, America’s biggest defense contractor, Boeing (NYSE: BA), suffered a terrible blow. Down (way) south of the border in Brazil, the government suddenly accelerated planes to choose a new fighter jet to replace its aging fleet of French Mirage 2000 jets. The winner, however, was not Boeing, which had offered its most advanced version of the F/A-18 fighter bomber to the Brazilians.

Rather, the winner was Sweden’s Saab, which sold the Brazilians on the merits of its bargain-basement-priced “Gripen NG” fighter — priced at just $6 billion, including 30 years’ worth of maintenance costs, for a total of 36 jets.

A billion here, a billion there…
Pricing its planes at $6 billion, Saab undercut Boeing’s F/A-18 bid by more than 22%, snatching victory with a price that just couldn’t be beat. But earlier this week, Saab found itself just that — beat.

Two years ago, you see, Switzerland’s military had agreed to become Saab’s first foreign customer for the new Gripen, buying 22 units of the fighter jet for $3.5 billion, a price very similar to the one Brazil will pay, about $159 million a plane. But despite having a contract inked, Saab lost its Swiss sale this week when the citizens of Switzerland voted in a referendum on whether they really wanted to pay the $3.5 billion price tag their government had negotiated for them.

Turns out they did not.

By a vote of 53.4% against, 46.6% for, Swiss voters elected this week to reject the Saab fighter jet buy. Why? News reports suggest Swiss voters rebelled over suggestions that the cost of maintaining and operating the Gripens could add $7.8 billion to the initial purchase price, making the true cost of the fighters something like $11.3 billion (10 billion Swiss francs). Even if that was the best price available at the time, it seems the Swiss no longer want to pay it.

What does it mean to investors?
If a contract falls in the Swiss Alps, does it make a sound? You might not think that a contract falling through across the pond has any practical effect on investors in U.S. defense contractors, but in fact Saab’s pain may turn out to be American defense contractors’ gain. Here are just three companies that could benefit from Saab’s misfortune:

Boeing: Believe it or not, this is good news for Boeing. Saab, you see, was counting on its Swiss sale to help build volume and cut development costs on the new Gripen “E” version of its jet, of which Sweden itself intends to buy 60 units. Now, initial volume production of this plane will be cut by about 25%, making it harder for Saab to hit its eventual sales target of 400 Gripens sold globally over the next 20 years. This in turn will make it hard for Saab to keep prices low, or undercut Boeing on future fighter jet contract bids. So for Boeing’s contract negotiators, life just got a little bit easier.

Lockheed Martin (NYSE: LMT): Similarly, the fact that Saab is now going to have trouble keeping costs low benefits Lockheed Martin, whose F-35 stealth fighter jet regularly outprices the competition in international fighter jet “beauty contests.” As was seen in Korea lat year, sometimes the technical superiority of the F-35 enables Lockheed to win these head-to-head contests despite its fighter plane’s higher price tag. But still, every little bit helps, and the likelihood that Gripen prices will rise as volume falls is a boon to Lockheed Martin’s contract negotiators as well.

Textron (NYSE: TXT): The biggest (potential) winner of all here, though, is Textron. As you may have heard, Textron recently began marketing a new, self-developed fighter jet called the TextronAirLandScorpion. Priced at an estimated $25 million or less, Textron’s fighter has the potential to strafe the heck out of Gripen’s sales pitch on its own $160 million warbird. What’s more, Textron recently purchased Beechcraft, maker of the even cheaper AT-6 Texan II turboprop fighter plane.

While neither plane boasts the technical capabilities of Saab’s Gripen — much less the prowess of Boeing’s F/A-18 or Lockheed’s F-35 — both of Textron’s budget-priced marquee military aircraft offer undeniable bang for the buck. The Scorpion in particular was not available when bidding began on the Brazil contract last year. But the first time it’s sent up against the Gripen in a sales pitch, Textron’s planes could give Saab a real run for their money.

Will Saab’s contract loss open it up to repeated stings from Textron’s Scorpion? It might.

Boeing 737 Max On Track to Fly in Europe Again

Boeing Has No Path to Recovery

Not All Analysts Cheering Boeing Back Into the Skies