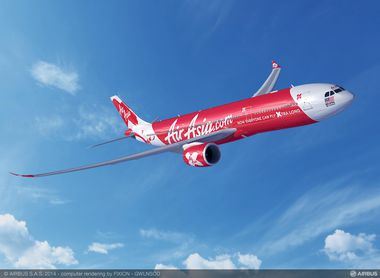 Source: Airbus Group NV
Malaysia-based low-cost carrier AirAsia signed a memorandum of understanding with Airbus Tuesday for 50 A330-900neo aircraft for AirAsia X, the Malaysian company’s low-cost, long-haul subsidiary. At a current list price of around $275 million, the order is worth about $13.75 billion to the European aircraft maker.

At the end of the first six months of 2014, Boeing Co. (NYSE: BA) claimed net orders for 499 new planes, compared with just 290 net new orders for Airbus. When Airbus finally announced the availability of its A330neo aircraft at the Farnborough International Airshow on Monday, the dam broke and the orders have been pouring in.

Air Lease Corp. (NYSE: AL) got the ball rolling on Monday with an order for 25 of the new A330-900neo and CIT Group Inc. (NYSE: CIT) ordered 15 of the new planes Tuesday morning, although the order did not specify which model the company was taking for its CIT Aerospace subsidiary. Dublin-based Avolon signed a memorandum of understanding for 15 of the A330neo aircraft, as well as another order for six Boeing 787-9 Dreamliners.

By our count that is 105 orders for the A330neo which is not scheduled for first delivery until the final quarter of 2017. That total is in line with the company’s expectations, according to an Airbus executive.

Airbus has also taken orders for more than 200 A320 family planes, both the current models and the new A320neo and A321neo.

One is tempted to think that Airbus was holding back on these orders so that the company could make a big splash at Farnborough. That strategy certainly seems to have worked.

ALSO READ: How Much Does an Airbus A320neo Cost?