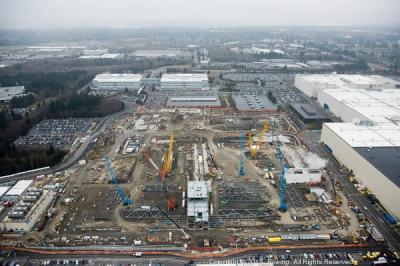 Source: The Boeing Co.
When Boeing Co. (NYSE: BA) and its Washington-state based machinists’ union agreed on a new contract in January of last year, the company went to work on its wing assembly plant for the new 777X aircraft. Groundbreaking for the new plant occurred in October, and now the first pieces of steel are rising from the ground.

At 1.3 million square feet, the new plant is the largest building under construction in the state this year and is scheduled to be completed in May 2016. Construction got off to a good start, beginning seven weeks ahead of schedule. The first 777X deliveries are scheduled for 2020, and Boeing’s order book indicates that nearly 300 have already been ordered.

The 777X wing assembly is made of carbon composite material and spans 230 feet. The building will house three 120-foot autoclaves to bake the layered carbon material into finished wing parts. At the groundbreaking, Boeing said that construction would employ 1,200 contract employees. Construction will require 31,000 tons of steel, 170,000 tons of concrete and 480 miles of electrical cable. The building is costing Boeing more than $1 billion to construct and equip.

Boeing had originally intended to build the 777X wing in Japan, but the company’s chief operating officer has said that the wing was returned to Washington because “complex composites manufacturing is a capability we need to have internally.”

The largest customer for the 777X is Emirates, which has ordered 150 of the planes. Qatar Airways has 50 of the planes on order, Etihad has ordered 25, Cathay Pacific has placed orders for 21 and All Nippon Airways and Lufthansa have each ordered 20 planes.