US Largest Arms Exporter at $23.7 Billion 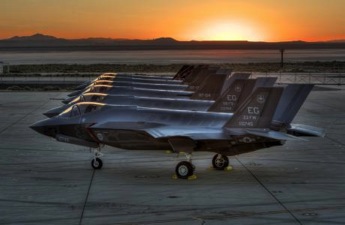 Source: Credit: Lockheed Martin
The United States exported $23.7 billion in arms to the rest of the world in 2014, more than double the total exported by second place Russia, which sold $10 billion in arms to global buyers. Other top sellers include France, the United Kingdom, Germany, Italy, Israel, China, Spain and Canada.

Some $8.4 billion of U.S. exports were directed to the Middle Eastern countries of Saudi Arabia and the United Arab Emirates (UAE). Saudi Arabia replaced India in 2014 as the top importer of arms. Following these two in the top 10 are China, the UAE, Taiwan, Australia, South Korea, Indonesia, Turkey and Pakistan. The data were reported on Saturday by IHS.

The U.S. supplied one-third of all arms exports and its top trading partner for arms is now Saudi Arabia. According to Ben Moores, senior defense analyst at IHS:

When we look at the likely export addressable opportunities at a global level for the defence industry, five of the 10 leading countries are from the Middle East. The Middle East is the biggest regional market and there are $110 billion in opportunities in [the] coming decade.

The number two exporter, Russia, is expected see a drop in sales this year, partly due to sanctions but, IHS said, primarily due to the closure of major programs. Some of Russia’s biggest customers, like Venezuela and Iran, are being hit hard by low crude oil prices, and another major Russian customer, China, is becoming less dependent on Russian technology.

ALSO READ: Cities With the Highest (and Lowest) Unemployment