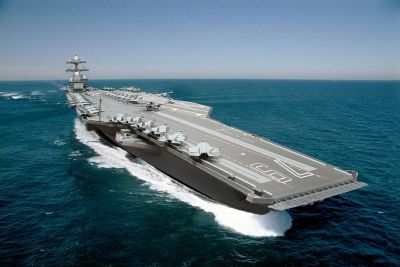 Source: Huntington Ingalls
According to the Federal Procurement Data System, the top 100 federal contractors in fiscal year 2014, which ended on September 30, 2014, received a total of $235.93 billion in contract awards. The top 10 recipients of federal dollars raked in $117.7 billion, or about 49.9% of all dollars awarded.

Here are the top 10 federal contractors for last year based on contract dollars awarded.

3. General Dynamics Corp. (NYSE: GD) received $15.35 billion in federal contracts in 2014. The company was the Navy’s top contractor with $9.69 billion in obligated funds. The Army spent $3.31 billion with General Dynamics, and the Air Force kicked in $376.74 million. All told, Defense Department contracts with the company totaled $13.63 billion.

6. McKesson Corp. (NYSE: MCK) received a total of $6.21 billion in federal contract awards in the 2014 fiscal year. McKesson is the top contract recipient from the Department of Veteran’s Affairs, with $4.23 billion awarded in 2014. The Pentagon awarded the company $1.66 in contracts in 2014, all from the Defense Logistics Agency (DLA). Last week McKesson received a 30-month extension to its DLA contract to replenish pharmaceuticals to the Pentagon’s Tricare pharmacies, which serve 9.5 million active-duty personnel, retirees and their dependents.