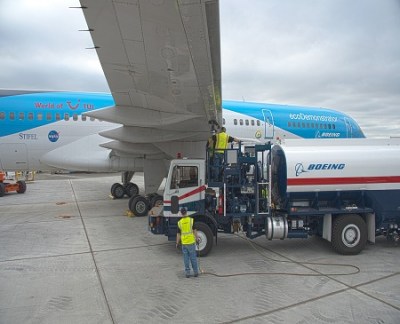 This is not the first test flight for a plane using fuel from at least some renewable source. Last year Lufthansa flew two flights using a blend of 90% biodiesel and 10% jet fuel on commercial flights between Frankfurt and Berlin, and between Orlando, Fla., and São Paolo, Brazil. The biodiesel fuel was provided by Amyris Inc. (NASDAQ: AMRS).

Another U.S. renewable fuels maker, Gevo Inc. (NASDAQ: GEVO), recently received an endorsement from the National Marine Manufacturers Association for its renewable isobutanol fuel as a replacement for ethanol in the marine fuel market. The company has also struck a deal with Alaska Air Group Inc. (NYSE: ALK) to purchase Gevo’s alcohol-to-jet (ATJ) fuel and expects to fly the first ever commercial flight on the renewable fuel later this year. Gevo’s ATJ fuel is a drop-in substitute for jet fuel, and the company believes that it can deliver the renewable fuel at scale and at a competitive cost with jet fuel.

What distinguishes the green diesel that Boeing used in its recent flight is that global production capacity for the fuel totals 800 million gallons annually already. That amount represents about 1.33% of the global jet fuel demand of 60 billion gallons a year, but it is enough to make production of green diesel worth the effort.

With government subsidies, the fuel can sell for about $3 a gallon, not out of line with jet fuel prices earlier this year above $2 a gallon. At the current price of around $1.75 a gallon for jet fuel, though, the comparison gets tougher.