Will Boeing and Airbus Prosper From Lifting of Iran Sanctions? 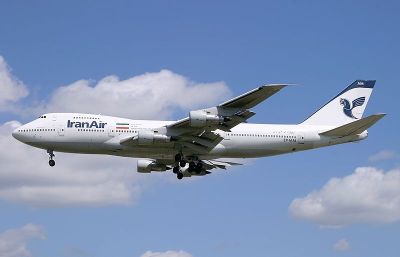 Source: Konstantin von Wedelstaedt / Wikimedia Commons
Before the 1979 revolution, Iran Air was probably the premier air carrier in the Middle East. The company flew a 747-SP on a daily non-stop, 11-hour flight to New York. Since the revolution one of those 747-SPs that was delivered to Iran Air in 1977 is still active, but not on flights to New York. And now the lifting of sanctions against Iran will give the country’s flag carrier and its other airlines an opportunity to buy new parts and planes without having to resort to the black market.

The Boeing Co. (NYSE: BA) and Airbus are said to be among the first beneficiaries of the new agreement. An official with Iran’s Civil Aviation Organization has said that it has put the renovation of the company’s air fleet on its agenda. The Islamic Republic News Agency (IRNA) issued a press release Sunday morning claiming that Iran will buy a total of 80 to 90 planes a year from Boeing and Airbus as Iran rebuilds its commercial air fleet. IRNA also noted that Iran needs 400-500 civilian aircraft worth at least $20 billion in the next decade. Those would likely be regional jets from Embraer and Bombardier and others.

Of the five still-flying 747s in Iran Air’s fleet, the average age is 36 years. Of 84 airlines operating the 747, Iran Air ranks 79th in age of aircraft. The airline also flies the Airbus A300, the first commercial jet Airbus built, and these planes have an average age of nearly 30 years. Besides Iran Air there are 15 other commercial jet operators (including the Iranian Air Force and the government) in the country according to Planespotters.net. All are presumably included in the upgrade to the country’s airplanes.

Iran may want to renovate its aircraft fleet but both Boeing and Airbus have backlogs of orders stretching as far as 10 years into the future. Iran may try to buy its way to the front of the line, but projections that Iran Air, which currently owns a fleet of 47 airplanes, needs to buy 100 new single- and dual-aisle planes may be exaggerated. And even if Iran Air did want those planes, neither Boeing nor Airbus could build them. China’s fledgling competitor Comac is years late with a single-aisle jet to compete with the 737 and the A320 families, and there are no other alternatives.

Additionally, Iran’s economy is controlled by the state, and while the airlines and the civilian regulator may want new planes in order to compete with Emirates, Qatar Airways, and Etihad, the government may decide that an Iranian competitor to the Big Three is a lower priority. Aerospace analyst Richard Aboulafia of the Teal Group told Crain’s Chicago Business in July:

At most, there may be some opportunity for lessors to place some aircraft. We aren’t opening up some sort of greenhouse that hasn’t seen the light for years. The demand has gone to the three big Gulf carriers, which all serve Tehran.

If Boeing or Airbus is expecting a new $10 billion order in each of the next 5 to 10 years, both may be disappointed.