A consortium led by Northrop Grumman Corp. (NYSE: NOC) has begun testing its clean-sheet design for a new U.S. Air Force training jet to replace the decades old T-38. According to a report at Aviation Week, the new trainer, designated as the T-X by the Air Force, began taxi testing in Mojave, California.

Northrop Grumman and its partners, BAE Systems and L-3 Communications Holdings Corp. (NYSE: LLL), are one of four teams that are expected to compete for the $8.4 billion contract. Boeing Co. (NYSE: BA) has partnered with Saab and is expected to offer its own clean-sheet design, while Lockheed Martin Corp. (NYSE: LMT) has teamed up with Korea Aerospace Industries (KAI) and they are expected to offer a modified KAI T-50. The fourth competitor is a group led by Raytheon Corp. (NYSE: RTN) that includes Italy’s Leonardo and Canada’s CAE Inc. (NYSE: CAE), and it is expected to present a version of Leonardo’s M-346 trainer that the group calls the T-100.

The U.S. Air Force has released a draft request for proposal (RFP) for a fleet of some 350 training jets to replace the T-38. The draft is expected to be followed by a final RFP by the end of this year with a contract award due in 2017 or early 2018.

The unique draft RFP offers incentives for exceeding threshold performance specifications, including high-g force maneuvering, high angle-of-attack maneuvering and aerial refueling. The threshold for high-g force maneuvering is 6.5 g and the objective is 7.5 g. For every 0.1 g above the threshold, the bidder receives a point bonus. Other things equal, including price, the bidder with higher sustained g-capability will receive a higher rating overall.

Aviation Week included the following unattributed photo with its story. 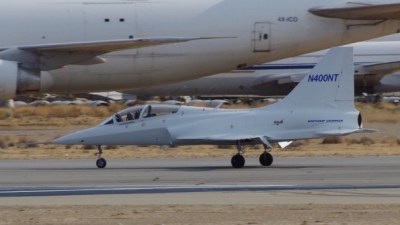 Lockheed and its partners completed the first test flight of the modified KAI T-50 in June. The Raytheon team had their trainer a last month’s Farnborough Airshow, and the Boeing-led team has said next to nothing about their entry.