How Much Does a 747 Cost: Inventor Dies as Boeing Cuts Plane's Production

When Pan American World Airways and Lufthansa asked Boeing Co. (NYSE: BA) to build a plane that had double the capacity of the 707, the aircraft maker did the obvious thing: they piled one single-aisle 707 on top of another to create a plane with two full-length decks (see photo at the end of this story). Building a plane with two aisles and 10 seats per row was inconceivable. Except to Joe Sutter, the engineer Boeing assigned to the project as chief engineer.

Sutter, who died last week at the age of 95, convinced both his masters and Boeing’s customers that the dual-aisle design was the right way to go, and the rest, as the saying goes, is history. For a fuller description of Sutter’s contributions to the aircraft industry, there’s a nice tribute at Leeham News.

Ironically perhaps, Sutter’s death seems to be a portent for the coming end of the 747. The first 747-100 was put into service in 1970, and those first planes sold at a list price of $24 million. Adjusting for inflation, that same 747 would sell today for more than $149 million, less than half the actual price of a new 747-8 passenger jet that lists for $378.5 million or the freighter version at $379.1 million. Boeing hasn’t got many buyers for its humpbacked plane, but price is not the problem.

Since January of 2015 Boeing has taken orders for just 10 747s, and it has a total of 21 jumbo jets on its backlog: 10 passenger jets and 11 freighters. Beginning this month, Boeing plans to cut production of the planes from one per month to just 0.5 per month.

In late July, Boeing lowered the number of 747s in its program accounting block from 1,574 planes to 1,555 and took a pretax charge of $1.2 billion against the program. In a filing with the U.S. Securities and Exchange Commission, the company added:

If we are unable to obtain sufficient orders and/or market, production and other risks cannot be mitigated, we could record additional losses that may be material, and it is reasonably possible that we could decide to end production of the 747.

Demand for new cargo planes has stalled, not primarily because cargo shipments have declined but because new planes like the 787 and Airbus A350 have increased capacity to carry cargo. This so-called belly cargo offers both the carriers and the shippers better economics.

Boeing made a de facto decision several years ago to let the 747 program live its natural life and die a natural death when it chose not to compete directly with the larger A380 superjumbo jet from Airbus. Given the then-high cost of fuel, Boeing would have had to replace the four engines on the 747 with more fuel-efficient versions. The A380 jet, if it can be filled with 500 to 600 passengers, is more efficient than the 747 as a passenger plane, and Boeing did not see the market for these massive planes growing enough to justify the investment to compete. In effect, Boeing gave Airbus the very-large airplane market.

Another irony of these large planes is that the A380 is, in fact, a dual-aisle version of the design that Boeing rejected in the 1960s. That does not prove that Sutter was wrong. The A380 works today where it probably wouldn’t have then because of other advancements in aerospace technology that have taken place over the decades. 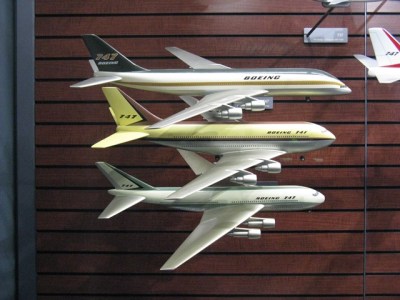 This Country Has the World's Largest Military

How Much Is SpaceX Worth?