The Boeing Co. (NYSE: BA) 777X is not scheduled to enter service until 2020, but that’s a lot closer than it may sound. The company has mounted the first General Electric Co. (NYSE: GE) GE9X engine to the wing of a 747-400 testbed plane and may be ready to begin flights before the end of the year.

The GE9X is rated at 105,000 pounds of thrust and includes a 134-inch diameter fan encased in a 174-inch nacelle. Those are the largest dimensional measurements ever for a jet engine: the fan is 11 feet in diameter and the nacelle is 14.5 feet in diameter.

The photo below, credited to GE and published in Aviation Week, shows how large the engine is compared to the 747’s GE-made CF6-80C2 engine (93-inch fan, 59,000 pounds of thrust) and how the new engine had to be canted forward and tilted upward to provide adequate ground clearance on the testbed plane.

The engine mounted to the testbed is the fourth built by GE. The first engine to test was fired up in March 2016 and is currently being checked out at GE’s icing test facility in Winnipeg, Ontario, which had to be modified to accommodate the giant engine. 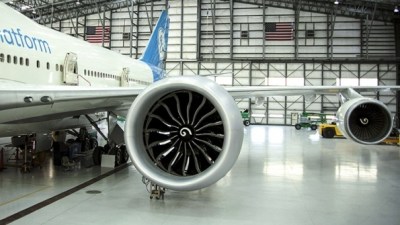 The second GE9X is being used to demonstrate performance conditions the engine will have to pass in order to pass the Federal Aviation Administration’s 150-hour block test next year. Part of that test includes running the engine at triple red-line conditions: maximum fan speed, maximum core speed and maximum exhaust gas temperature to test the engine at the most extreme conditions.

The third engine is being prepared for crosswind testing at a GE facility in Ohio. A fifth is headed for Winnipeg as soon as it is built and another three are being assembled. The first flight-test engines for the first 777X will be shipped to Boeing later next year and the initial flight of the first 777X family — the 777-9 — is expected in early 2019.

At the end of October, Boeing reported orders for 326 777X family aircraft. Boeing is also considering adding a 777-10 to its 777X family to seat up to 450 passengers, compared to the 500 or so in a typical configuration of the Airbus superjumbo A380 that can accommodate a maximum of 850 seats in a single-class configuration.