Boeing Co. (NYSE: BA) on Tuesday showed for the first time the aircraft the company plans to enter into a competition to build an unmanned aircraft system (UAS) to refuel U.S. Navy jets operating from aircraft carriers. The Navy quietly released a final request for proposals in October and expects to make a decision by September 2018.

Competing against Boeing are Lockheed Martin Corp. (NYSE: LMT) and privately held General Atomics Aeronautical Systems. Northrop Grumman Corp. (NYSE: NOC) pulled out of the bidding in late October saying it would not be able to meet the Navy’s contract terms.

The refueling drone, dubbed the MQ-25 Stingray, is being designed for in-flight refueling of carrier-based fighter planes and the drone must be capable of operating from a carrier as well. The Stingray program was conceived originally as a stealthy drone capable of multiple missions and has been gradually winnowed to a refueling tanker. An additional contract requirement is that the drone tanker use existing aerial refueling systems to cut down on project development time, cost and risk.

Boeing showed off its version of the drone on Tuesday in St. Louis. This photo accompanied the press release: 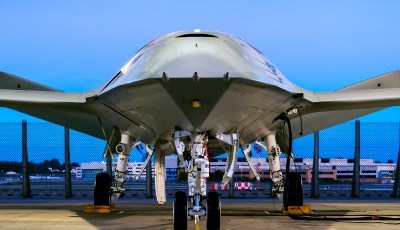 The MQ-25 must be capable of refueling the Navy’s F/A-18 Super Hornet and the EA-18G Growler (both Boeing aircraft) and the F-35C Joint Strike Fighter from Lockheed Martin. 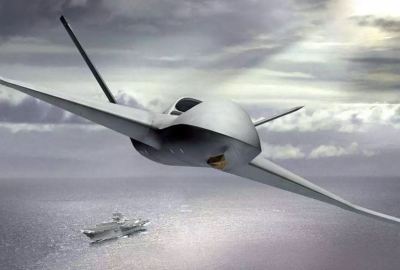 The chief of naval operations wants the first carrier flight of the refueling drone by 2019, and program officers are aiming at having the drones operational in the 2020s. The number of MQ-25As included in the contract has not been specified.