At a science and technology forum sponsored by the American Institute of Aeronautics and Astronautics in Orlando, Florida, Boeing Co. (NYSE: BA) revealed a concept of a hypersonic aircraft capable of speeds up to five times the speed of sound (Mach 5). The concept leads to a “reusable hypersonic demonstrator vehicle” to replace the Lockheed Martin Corp. (NYSE: LMT) SR-71 Blackbird that was retired from active service in 1999.

The Blackbird was a high-speed reconnaissance (spy) aircraft that once flew from New York to London in less than two hours, more than an hour less than the same trip on the Concorde supersonic passenger jet. The plane replaced the famous (or infamous) U-2 spy plane, one of which was shot down over what was then the Soviet Union in 1959.

The whole idea behind the Blackbird was to build a plane that could fly fast enough to avoid being shot down by Soviet planes or missiles. The Blackbird’s top speed was officially listed as Mach 3.2.

Boeing’s proposed successor would compete with a concept proposed by Lockheed that the company calls the SR-72. According to Aviation Week’s Aerospace Daily & Defense Report, the new hypersonic plane could be in service by the end of the 2020s.

Boeing has paired up with Orbital ATK (NYSE: OA), which will provide the engine for the demonstrator. The Pentagon has award Orbital $21.4 million to begin developing the engine. Orbital has agreed to be acquired by Northrop Grumman Corp. (NYSE: NOC) in a $7.8 billion deal announced last fall. The acquisition is still be reviewed by federal regulators.

The Boeing concept uses a “waverider” design in which the aircraft surfs the shockwave from the craft’s leading edge, reducing drag. A photo and more details are available at Aerospace Daily & Defense Report, and see the Wired story from 2010 for more on the SR-71, pictured below. 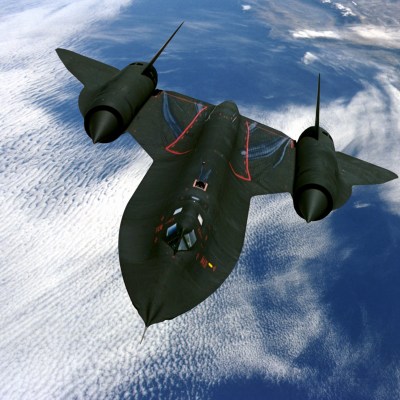