A Scent of Bacon iPhone Alarm 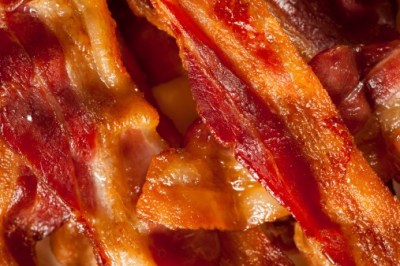 Source: Thinkstock
The Apple Inc. (NASDAQ: AAPL) iPhone can now be adapted into an alarm clock that wakes up its owners to the smell of bacon. The Oscar Mayer Institute for the Advancement of Bacon has created an app and a device that attaches to the iPhone. The novelty of the product surpasses most other uses of the iPhone, whatever its real utility may be.

Oscar Mayer has begun to market the product with the tag line: “A Bacon Awakening Beyond Your Imagination.” Most iPhone owners probably have never imagined a bacon-scented alarm at all.

As for the app, which can be downloaded at iTunes:

Wake Up & Smell The Bacon is a simple alarm clock app that starts your morning with the mouthwatering sound of Oscar Mayer bacon. Rotate the skillet to select your wake-up time, then get ready for a bacon awakening beyond your wildest imagination. The app connects with the Oscar Mayer Wake Up & Smell The Bacon scent device, turning your phone into a bacon-scented alarm clock. Apply for your chance to get a bacon scent device at WakeUpAndSmellTheBacon.com from March 3rd until April 4, 2014.

The difficult part of using the product is obtaining the hardware to make it work. People have to apply for the device, and there are “limited quantities available.” To get one, people must answer quiz questions and then are randomly picked to be winners. And 4,700 people will be selected, according to the official rules:

A bacon scent cell phone attachment.ARV:$40. Total ARV of all prizes is$188,000. Limit one prize per email address/person/household. Odds of winning depends upon number of game plays and the time of play. No substitutions or transfers of prizes permitted by winners. Sponsor reserves the right to substitute prizes of equal or greater value. Unclaimed prizes will not be awarded.

To make certain that Oscar Mayer puts its best foot forward as part of this promotion of its product, Wake Up & Smell the Bacon “is inspired by bacon of the highest caliber.”

Of course it is. This may be the single best chance Oscar Mayer ever has to promote its bacon products.

McAfee Gears Up for IPO

Has BlackBerry Positioned Itself for the New Normal?