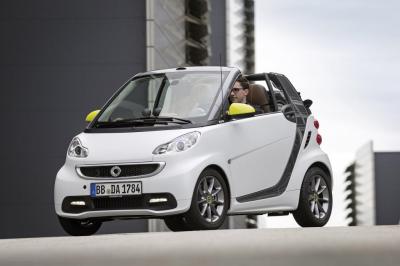 Source: courtesy of Daimler Global Media
On the front page of the General Motors Co. (NYSE: GM) Chevy website is a list of all its models that won the recent 2013 J.D.Power Initial Quality award — five in total. The distinction is among the most important and honorific in the industry. Chevy won “more than any automotive brand.” Somewhat hidden on other pages in the website are a lengthy list of “zero percent loan deals” and eye-popping “cash back” offers. These incentives are expensive for all automotive manufacturers and make industry critics wonder how much sales activity is driven by deals and not raw demand for new models.

Chevy’s list of incentives is a very long one. The badly troubled electric Volt has a $5,000 consumer cash deal. Even the Impala, which recently won an award from Consumer Reports as its highest rated sedan, carries a 2.9% APR for 60 months. How many people would like to get that rate for a mortgage?

The deals are not exclusive to Chevy cars and trucks. Nissan has a zero percent for 60 months option for its Altima, even though the car has a “5 Star Overall Rating,” whatever that might be. Even expensive cars and trucks are on sale. Lincoln offers deals for its Navigator that include zero percent for 60 months and $1,000 for “Competitive Conquest Bonus Cash,” whatever that is.

There is more than one theory about the rise in car sales in the United States, which has gone on for more than two years. Economists are in awe that annual sales could near 16 million, a figure last posted in 2006, and one that would approach record levels. The first possible trigger for the rebound is that the recession was so bad that consumers could not buy a thing. Once unemployment fell and gross domestic product rose, consumers felt less risk spending money on a list of items that ranged from washing machines to homes.

The second theory may be the most powerful one. Car industry research operation Polk announced that the average age of all vehicles on the road in America had hit a record at 11.4 years. Part of the credit for the longevity goes to better quality of cars. However, vehicles so ancient begin to break down. At some point, it is less expensive to own a new car that to fix an old one.

Finally, there is the incentive theory of car demand. If it is even partially accurate, some portion of demand is false, and the effort to get new buyers is costing car companies tens of millions of dollars, if not more.

One of the benchmarks of how well the car industry in doing is whether incentives are low and auto manufacturers do no have to pay huge aggregate sums to get customers. Clearly, this industry in not there yet.